Barbara Jeans and Pumpkin Patch with Grandma and Grandpa 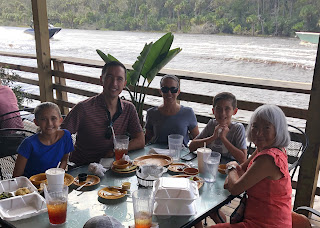 Today we met Grandpa and Grandma at Barbara Jeans for lunch and then went to a pumpkin patch that was nearby. The water is pretty high this time of year and it was the highest we'd seen at Barbara Jeans. A moment after Grandpa took the picture on the blog, the boats created some big wake waves that blasted all over Connor and Andrea.

After lunch we picked out some pumpkins and we're excited for it to cool off soon and for Fall. 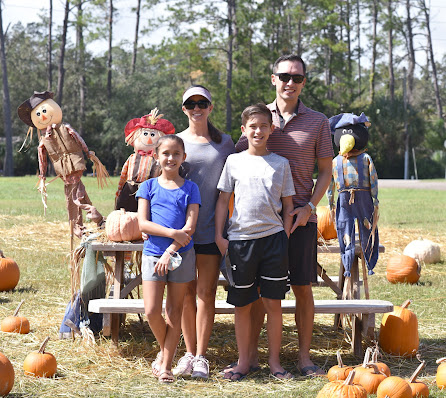 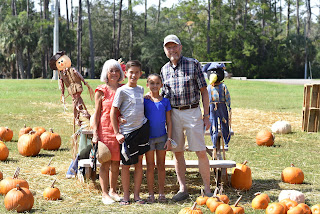 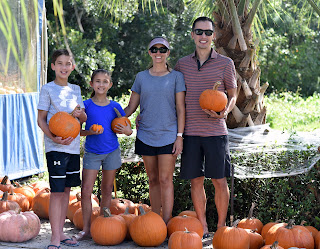 Posted by Shawn Vernon at 2:06 PM No comments:

Top Golf with Zoey and Charlie 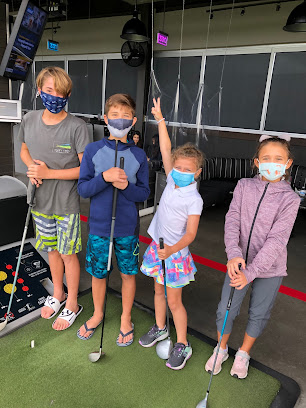 Saturday afternoon we went to Top Golf with a couple friends. Connor invited Charlie and Paige invited Zoey. We got a nice third level spot and the weather was a little cooler lately so it was a nice day for hitting some golf balls. I think I sliced almost every shot to the right fence, but the kids were all so good and they actually had some competitive games and were hitting the balls where they were aiming. 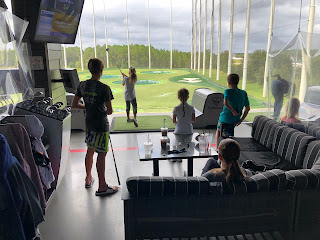 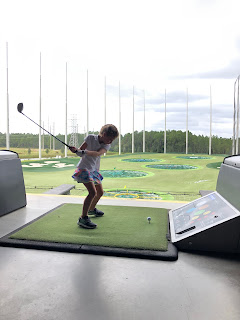 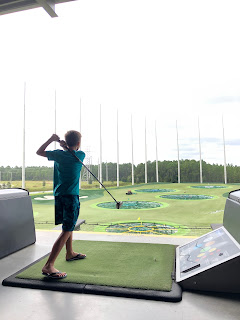 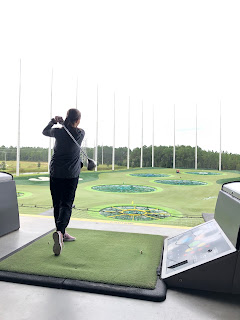 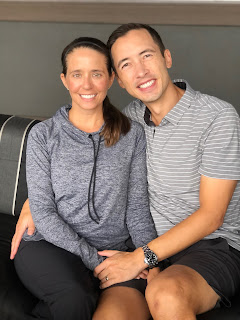 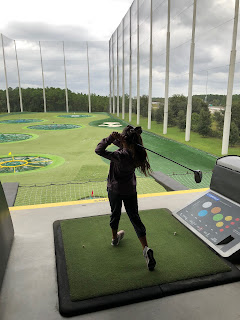 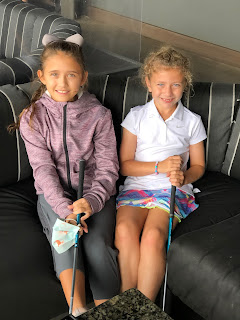 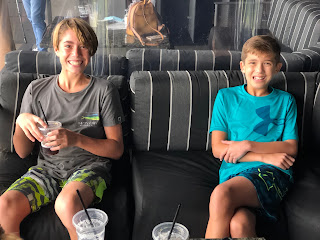 Posted by Shawn Vernon at 1:56 PM No comments: 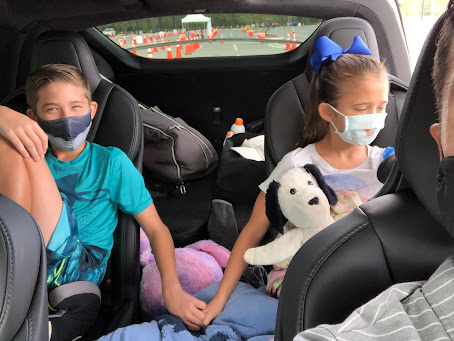 On Saturday we went to the Mayo Clinic Hospital for flu shots. We'd originally put together appointments at the doctor's office for each of us but Andrea learned that there was a drive through for COVID testing and for flu shots. Andrea printed up the paperwork for the flu shots and we went through in the morning on Saturday. There was no wait for the flu shots and the nurses did a nice job making it quick and relatively painless. Paige was a little scared for her shot and Connor held her hand, he's such a sweet brother. I snapped a pic of them in the back when it was Paige's turn.

Posted by Shawn Vernon at 1:45 PM No comments: 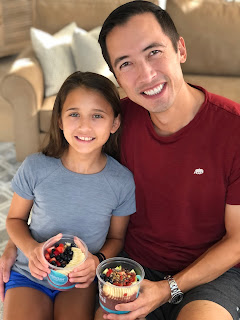 Paige has been wanting to try a local restaurant called Nektar that has healthy fruit and vegetable offerings. We both tried some fruity bowls, had them delivered, and we were pleasantly surprised that they actually looked exactly like the pictures on their website. The bowls were pretty much like a smoothie with fresh fruit on top. Paige gave hers an 8 out of 10 and I enjoyed mine as well.

Posted by Shawn Vernon at 7:08 PM No comments:

On Saturday we went to the beach club and invited Quinn and Cailyn to join us. Connor ran in to his friends Robert and Hugh as well and they all played at the beach for a few hours in the afternoon. We're still avoiding socializing indoors and eating at restaurants indoors, but we hoped that some beach time with friends outdoors would be fairly low risk. 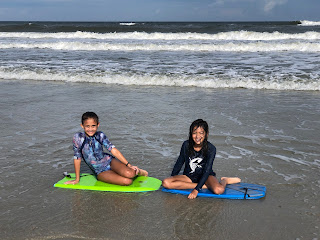 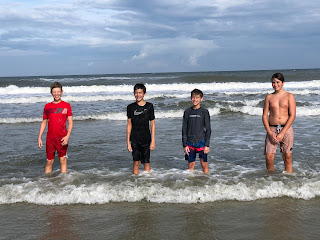 Posted by Shawn Vernon at 7:06 PM No comments:

Connor and Paige have continued to do online schooling from home and we were given the opportunity to decide whether to continue remote learning for Quarter 2 or to go in to school. As COVID cases continue to go up and down throughout the US and the uncertainty with the pandemic, we decided to keep them home for the second quarter as well. Both kids have been doing pretty well with it and some of Connor's friends have actually transitioned from going to school to remote learning as they have come in to contact with people that were infected. We don't know too many people directly recently that have contracted COVID, however the big news this last week was when President Trump revealed that he'd been infected. It's not clear whether remote learning will be offered past December, but until then we're planning to keep the kids at home. We are proud of them for adjusting to the new routine and for all the new skills they've been learning. 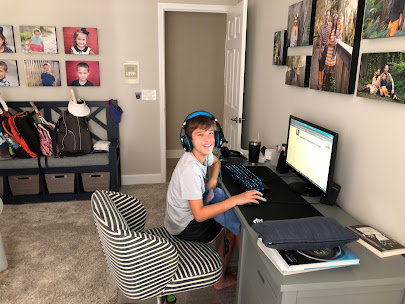 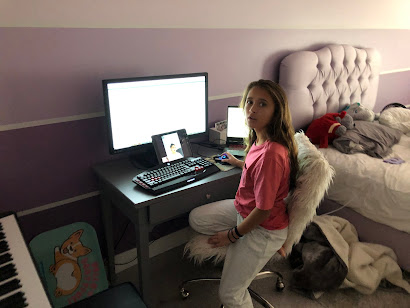 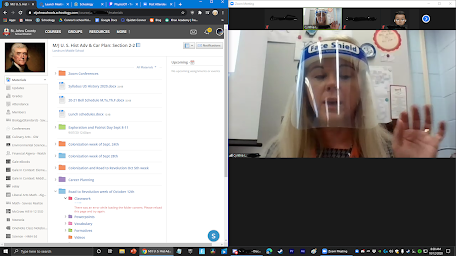 Posted by Shawn Vernon at 7:03 PM No comments: 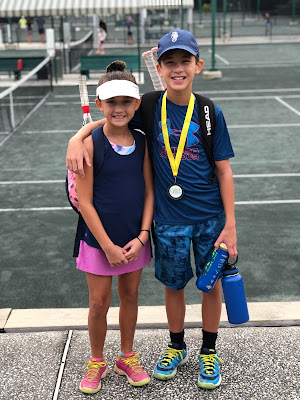 On Saturday morning, both kids played in a level 8 tennis tournament at Eagle Harbor. Connor started earlier in the morning than Paige, so we decided to take them separately. I drove Connor over and his first match started at 8am. 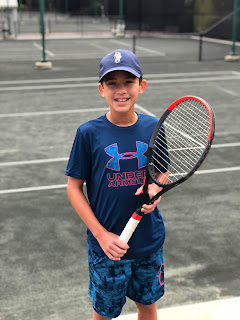 Connor played really well in all of his matches and won all of them. His opponents were not bad players, but Connor just played at a higher level in all aspects of the game. His serve, service return, ground strokes, ball placement and court awareness were solid and he played consistently. 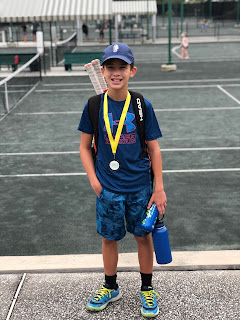 Andrea and Paige arrived just as Connor was receiving his first place medal and we snapped a couple of pics with both kids together. 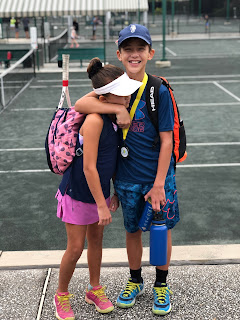 Paige was a little grumpy because she had a blister on one heel that was bothering her. Andrea put a big bandaid on it along with three socks and thankfully that kept it from affecting her out on the court. 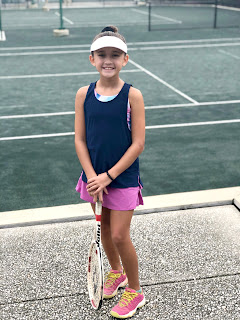 Paige won her first four matches and was on a roll. The format was one 5 game set and Paige only lost one game in the first 21 that she played. She won 5-0, 5-0, 5-1, 5-0. We were hoping she was done and had one at that point, but there was one other girl that had also won all of her matches so they decided to play them against each other although Paige had a better overall record. The match was a close one and although it was tied 3-3 at one point, Paige ended up losing 3-5.
Overall, we were happy with Paige's performance. She showed great sportsmanship, tried hard, hit her shots with confidence and she's improving with each match.

Great job to both kids! 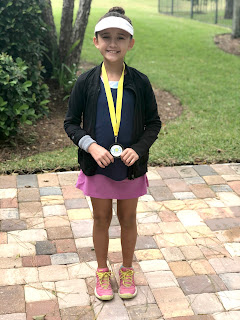 Posted by Shawn Vernon at 6:25 PM No comments: