Snow fun is NO fun 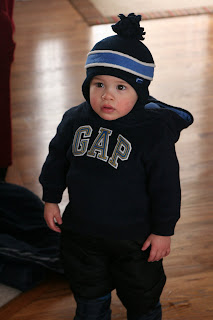 It snowed over the weekend and we decided that we'd better get Connor out in his snowsuit this year before he out grew it. It was a project getting him ready, and he didn't like walking in his boots or putting on his gloves, but he seemed excited about going outside. 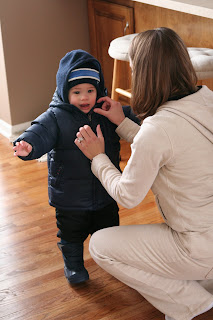 Surprisingly, Connor didn't like the snow at all. He hated when Daddy put him down in it, and he'd reach for Daddy and would whine until Daddy picked him back up.

Connor standing in the snow and scowling: 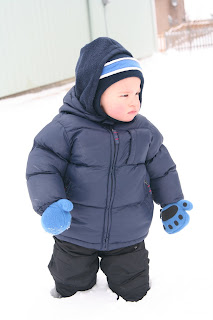 Mostly, he just wanted to play with his regular outside toys, which wasn't as much fun when wearing mittens and slipping around on the driveway. 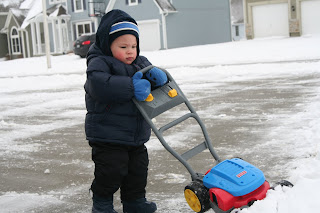 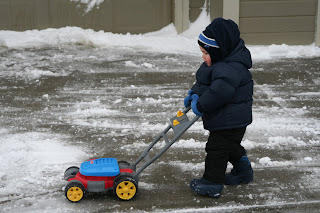 Snow fun is NO fun!
Posted by Shawn Vernon at 2:07 PM No comments: 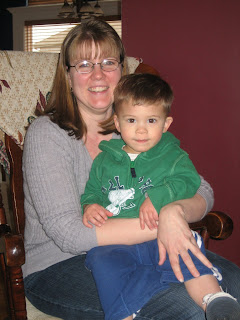 Today was a sad day for Connor. It was his last day with his babysitter Jenny. She's been a big part of his life since he was born, and she's been a great caretaker for Connor when Mommy and Daddy are at work. Jenny did a great job helping us raise Connor and we know that she gave Connor her time, attention, and love. Connor's starting pre-school on his birthday (Monday next week!) and he'll be going there full time, so he won't be seeing Jenny on a regular basis any more.

Connor's also been good buddies with Jenny's kids, Sarah and Steven and he'll miss playing with them. We tried to get a picture of just them together, but Connor insisted on having Jenny in the picture too. 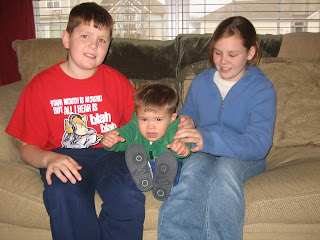 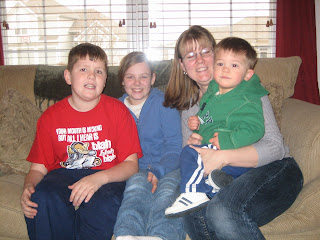 Thanks for everything Jenny!
Posted by Shawn Vernon at 9:10 PM No comments:

Connor's 2 year professional pics are up!

We went and got Connor's 2 year pictures this past Monday. As usual, our photographer Jennifer had a great eye for setting up photos and she was able to get the best smiles and reactions out of Connor.

This is the sixth time we've been to her since Connor's been born and we're consistently blown away with the results! 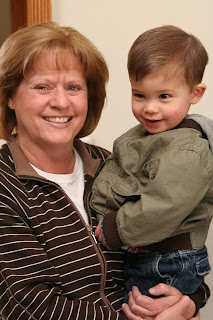 Aunt Amanda had everyone over to celebrate Grammy Genie and Aunt Abby's birthdays today. Connor was feeling better today (more on that later), but he still didn't have any appetite and didn't get to eat any of the yummy food. It was great to see everyone and Connor had a lot of fun. 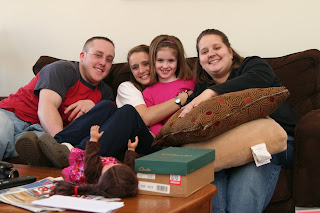 Connor had a VERY hard time sharing crayons today. Cousin Allison wanted to use some, but Connor wanted the whole box to himself. He got very worked up when we made him share. We've got to work on that, he starts at pre-school in 2 weeks! 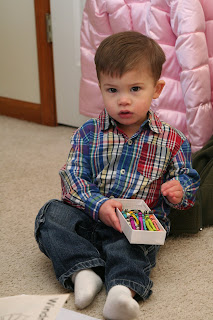 Uncle Nate's just crazy. He decided to hog the big circle chair and took it with him wherever he went. 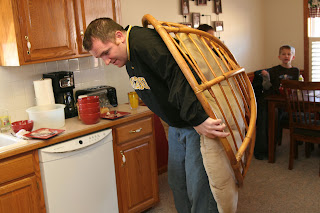 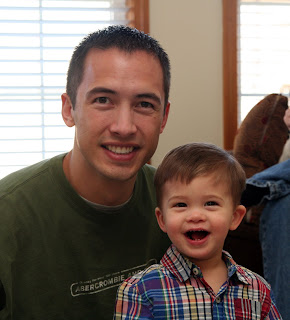 Posted by Shawn Vernon at 5:41 PM No comments:

Mommy and Daddy reunited with Mr. Connor today. We took the first vacation since our Alaska trip in Fall of 2006, when Connor was still in Mommy's tummy. We had a great trip to the Mexican Riviera with the Vernon family, but it was a long time apart from our little boy and we're glad to be back together again.

We were apart from Connor for 8 days and we knew we'd miss him, but never imagined we'd miss him so much. Connor stayed with Grammy Genie seven of the days. Thanks Grandma Genie, there's no way we could have gone on this trip without you. Connor stayed the last night with the Rudolphs. Uncle Nate knows that Andrea likes to have Connor's hair fixed, so he put some gel in it before we got there. We kind of liked the mohawk! 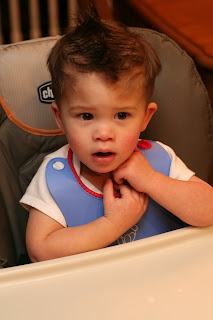