Our photographer changes the photo's on her webpage's home page from time to time, and Connor finally made the cut! I guess all he had to do was strip down to his bare bottom to finally get noticed.

To see him, watch the pictures on the home page:
http://www.m-mphoto.com/ 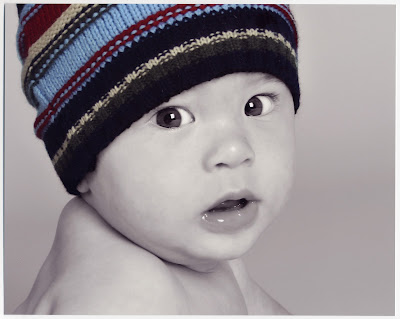 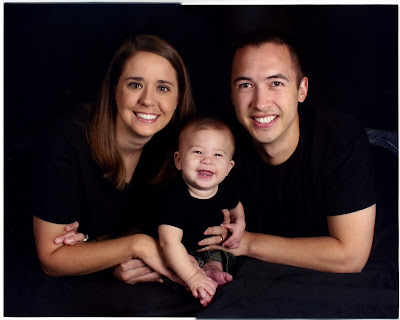 Connor's trying out new sounds. According to Mommy, the Speech Language Pathologist with her Certificate of Clinical Competence and a Master's degree in Communication studies, it's babbling and is a precursor to speech development. To Daddy's ears, it sounds like he's saying Da-Da. A precursor to the word "Daddy" and proof that he loves Daddy more than Mommy.

He's nearly crawling now, he'll get up on his knees and will lunge forwards sometimes, but he isn't consistently getting around yet... That's fine with us, he's a handful even when he's stationary.

He still loves standing up, and the other day after his bath he was having a great time holding Mommy's hand and goofing around in his diaper. I thought this was a pretty cute shot of him: 6 month pics are up!

Connor got his 6 month pictures taken over the weekend. He will hate us for it some day, but there are even a few nude shots.

Connor passed his 6 month checkup and our doctor gave us the green light for baby food! I'm certain Connor's sick of eating formula mixed with cereal, and now he's finally got variety. We've started him on green beans and bananas so far and he gobbles it up. He'll open his mouth wide and kick his feet as the spoon comes towards him. A big difference from the first few feedings when he's scowl at us and we had to push the disgusting cereal between his pursed lips. His measurements are pretty average... Ok, actually they're perfectly average. I think he's an above average baby, but our doctor thinks otherwise.

Maybe this just means we're perfect parents and we've got him perfectly on track. I like the sound of that better...
Posted by Shawn Vernon at 6:34 PM 2 comments:

Connor's somehow survived our parenting now for six whole months. Pretty impressive for all of us, it's been a tough six months for everyone, but we are doing great and Connor is growing up fast.

He's been learning to sit up, and has been doing pretty well with it. He can't pull himself into the sitting position, but if you put him there he's able to stay up really well. The only time he has problems is if something gets his attention behind him and then he tries to turn to look. I think his noggin's pretty heavy like his dad's and once it's off balance, he's doomed.

He's also been doing great with eating his cereal. He hated it at first, absolutely hated it, but he's been eating it regularly and is doing well at taking food from a spoon. He eats cereal once in the morning and once at night. He's very cooperative now and he sits in his high chair while he eats. He looks so little in it. Last thing, Connor wanted to thank Grammy Genie and gang for having an impromptu 6-month birthday party while his mommy and daddy were away. Shawn and Andrea were taking a short vacation in Springfield this last weekend, and the grandparents decided to have a little party while they babysat. So much more fun to party with the grandparents, mommy and daddy are so lame!
Posted by Shawn Vernon at 3:30 PM 2 comments: