We celebrated with the Rudolphs on Friday night at Uno's. Saturday was no fun since Daddy had to go to class, but Sunday Mommy and Daddy went to a movie and a peaceful lunch while Grandma and Grandpa Anders watched Connor.

Hopefully Mommy had an enjoyable birthday! We love you so much!! 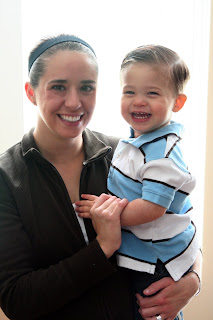 The Easter Bunny came today and dropped off Connor's Easter basket. He got two books, a toothbrush, a chocolate bunny, an outfit, pajamas, and a button down shirt. He's been a very good boy and the Easter Bunny rewarded him handsomely. 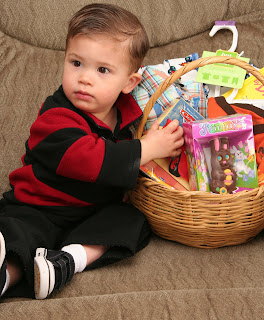 Checking out the goodies: 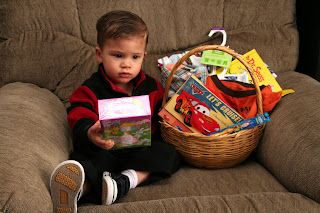 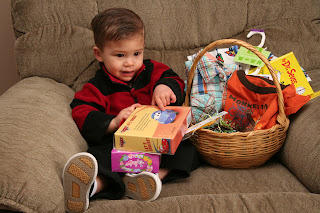 Connor was a little tentative about biting the chocolate rabbit at first. 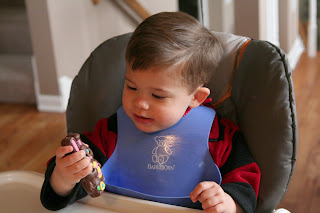 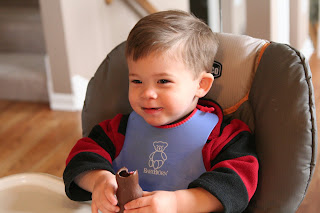 Today we went to Zona Rosa to watch the Easter parade. There was apparently an Easter parade on the Plaza for many years where people would get all dressed up, and they've tried to bring back the tradition up at Zona Rosa. I think this was the second year they've done it up North.

We got there a little early so Connor could see the Easter Bunny, but Connor hated him. We were waiting in line and when we got within sight of the Easter Bunny Connor got very upset and started squirming and trying to get away. We are either good parents or horrid parents because we made him face the terrifyingly large rabbit and got a few pictures with them together. 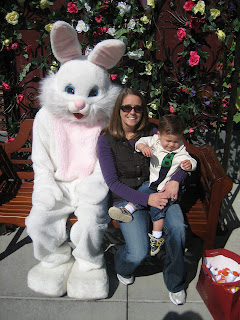 We walked around and looked at the petting zoo and at all the people. In this picture, Connor's still pretty angry about the Bunny incident. 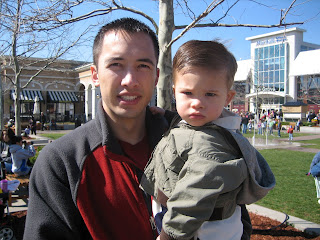 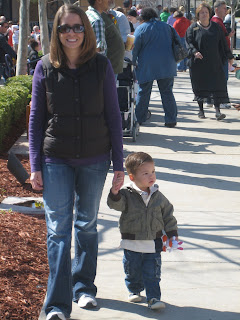 The parade was very short, but it was fun to see so many people dressed up. Some local "celebrities" judged the people in the parade and we stuck around to see who won.

Watching the parade with Daddy: 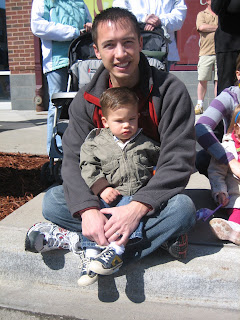 Rocket and Theresa (local radio hosts) along with some local news anchors that did the judging at the parade: 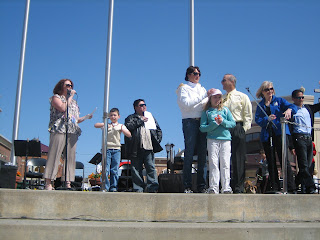 After the parade we went and ate some pizza and Connor sat in a big boy booster seat. 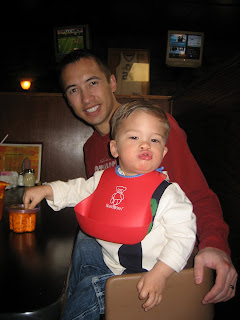 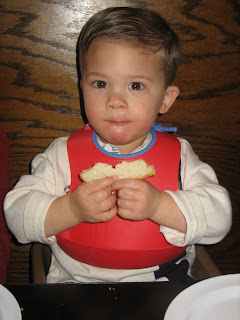 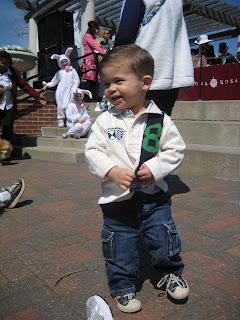 On Thursday Mommy and Daddy left work early to be with Connor at his class's Easter party. We got there a little early, right after everyone was waking up from nap time and it was fun to watch Connor interacting with the other kids. He's definitely one of the littler kids in the class and the older girls seem to really like babying him. Before they got out all their Easter party snacks, Miss Leah read everyone a book and they sang some songs. (More on the songs later)

Everyone got an Easter bag with goodies and they made an Easter Bunny and an Easter Egg out of paper (We hear Connor had lots of help from Miss Leah).

Connor and his Easter goodies from school: 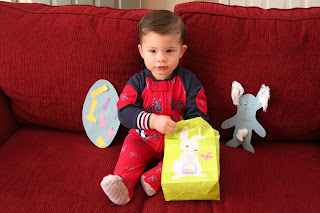 Ava is a very social girl in his class and she sits by him in the kitchen during meals. She is always very interested to see Connor's Mommy and Daddy and tells us all kinds of things when we see her. 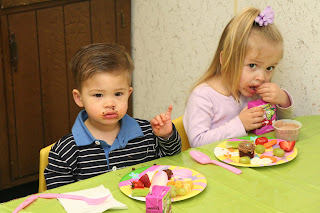 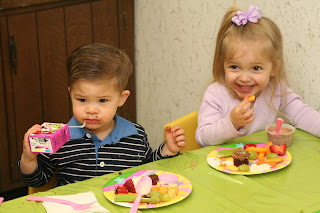 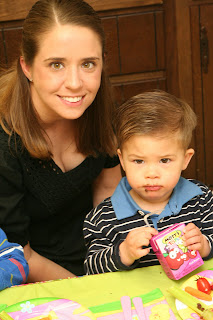 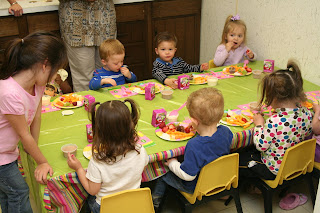 Connor's been doing really well with stairs lately, he's gotten a little too brave with them. At school they've got a rail that's set nice and low for the kids and a neat wall with animals and nature scenes painted on it. Connor likes to go up and down the stairs and point out all the neat animals.

Practicing on the stairs at school: 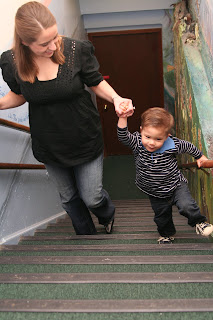 Here's Connor dancing along to the "Pizza Hut" song with Mommy. During the "Pizza Hut" part of the song, they make a little hut with their fingers. During the "Kentucky Fried Chicken" part, they flap their arms like a chicken. During "McDonald's" they are supposed to make a big M motion with their arms. Connor doesn't have the "McDonald's" portion down perfectly, but he loves the song and it's so cute to watch him dance along to it.


Connor also loves to dance along to the songs that his bear sings. Great Grandpa and Grandma got him the bear for Christmas and there's a "Teddy Bear" song that he dances along to and it's ridiculously cute. We'll have to get a video of that one soon.

Connor's also been practicing jumping. He falls much more than he lands well, but he's getting pretty good.

Recently we've been able to reason with Connor. It really surprised us the first time it worked. Connor was refusing to eat veggies, as he often does, and we told him that if he ate it he could have a cookie. We were shocked that instead of instantly freaking out at the word "cookie" and demanding one immediately, he picked up his spoon and ate his veggies. It was amazing! A few days ago when we were at Target, Connor didn't want to sit in his stroller. Mommy told him that if he wanted to walk around he would have to hold Daddy's hand. When she asked him if he understood he nodded (which he always does if you ask whether he understands something), but instead of running off like he usually does he walked over to Daddy and grabbed his hand. He held it the entire time we were at Target, and he didn't pull away or collapse in a heap like normal.

Connor's really loving his books again recently. His favorite right now is "Go Dog Go" by P.D. Eastman. It's definitely not one of Daddy's favorites, there's no rhyming and no story, but Connor loves it. We read it to him before bed and he doesn't want to let it go, so we've actually let him have it in his bed and he falls asleep flipping through the pages. 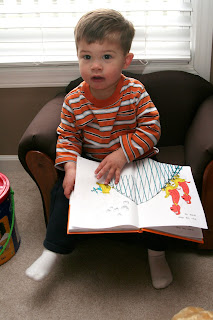 We've also setup his DVD player again for him in the car. We got it a while back, but he didn't watch it at first so we put it away. A couple months ago we took it back out for a long drive, but didn't set it up in front of him. Instead, we set it up between the front seats, so he had to turn his head to watch it. He hadn't been feeling good at the time, and we're not sure if it was because he was car sick from turning his head to watch the DVD or from being sick in general, but he threw up all over himself. Since then we were a little nervous to setup the DVD player, but recently he's been getting bored in the car so we attached it to the back of the driver's seat so it's directly in front of him. For a while he watched "Seasame Street's - Sing yourself silly", but last week Mommy had a great idea of getting Disney's "Cars". Connor loves cars in general, and really loves the movie. If we're getting ready to go somewhere and he doesn't want to go, you just remind him that he gets to watch his DVD and he says "DD!" and then he's ready to go.

Speaking of cars, Connors favorite thing to do at home is play with his cars and trucks. If you're around when he's got his cars out, he'll fuss at you and will point at the ground until you sit down and play. He likes to either send the cars down the ramp on his garage, or he'll do the splits and will insist you do the same so you can push cars back and forth to each other. 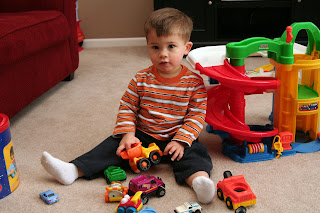 Sorry buddy, Daddy's not that flexible! 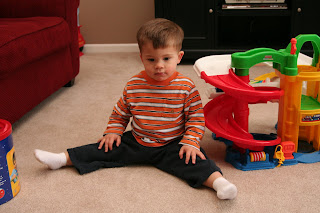 All the cars and blocks: 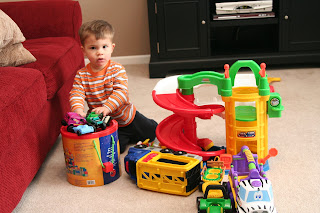 I wasn't planning to take this picture, but Connor had a runny nose while I was taking pictures and I asked him to wipe it. Not sure if we've mentioned, but if you tell him to wipe his nose, he'll grab a tissue, will wipe his nose and then throw the tissue in the trash. 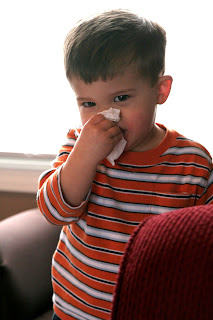 Grammy Genie came by yesterday to visit with Connor and to give him his Easter basket. Connor had fun rooting through his Easter loot and playing with Grandma. 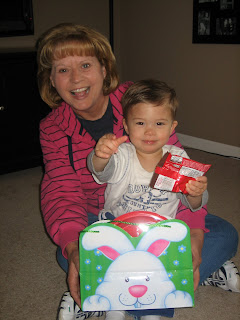