Santa got Paige an Osmo iPad game for Christmas. It came with some letter games, some shape puzzle games, and a drawing app too. This weekend we were playing with it and did the drawing app. You use a blank piece of paper and the Osmo app will overlay a drawing on to it. You look at the iPad as you trace the lines and then when you're done apparently it pieces together a time-lapse video of the drawing.

When we were done, we colored in the princess and Paige also wanted me to write out a story on the page, which is essentially the Disney Rapunzel movie plot. We were very happy and proud of our beautiful creation! 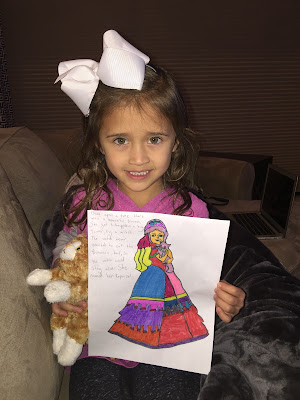 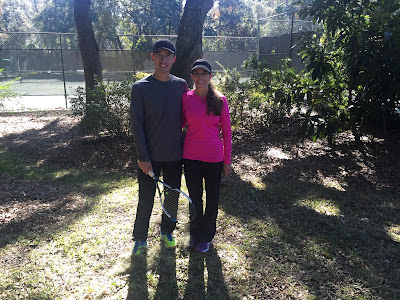 Since last Sunday was rained out, we negotiated with the pros at the Omni resort to see if we could come back the following weekend instead. They decided that would be fine, and today Andrea and I went back for the last part of the Double's Bootcamp session. It was very cold out, and a few of the courts had some slippery areas as they thawed, so it was a little awkward getting started. It was also a bit tough for us since the other participants had been playing all weekend and we arrived a little cold and a little tight at first. We got put together with some "A" level players and we held our own, although we definitely were challenged. It was a good workout and we are glad we came back and got to finish the final 3 hours of tennis at the Bootcamp.
Posted by Shawn Vernon at 7:01 PM No comments: 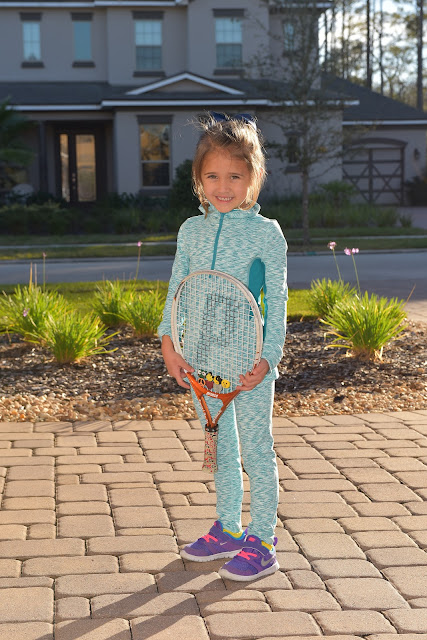 Paige has been working on her tennis quite a bit lately. Andrea talked to the coaches at JCP and they decided Paige was ready to move up to a slightly more advanced tennis group. She's been to the clinic this past week and did well, although it took a little convincing. She was upset at first because she was worried they wouldn't do the kiddie games like the "animal game" and some other activities she likes. Thankfully once she arrived everything went well and she had a blast. The new class is an hour long, and it's a nice addition for her so she gets some more organized physical activity throughout the week.

Paige also had basketball at school recently and did pretty well during PE. She made a few baskets and was very interested in trying to practice at home. I lowered our basketball goal as low as it would go, and although she struggles to get the ball high enough, she does fairly well. She's been working on her dribbling as well and is able to keep it going for quite a while, although it's still hard for her when she's moving. 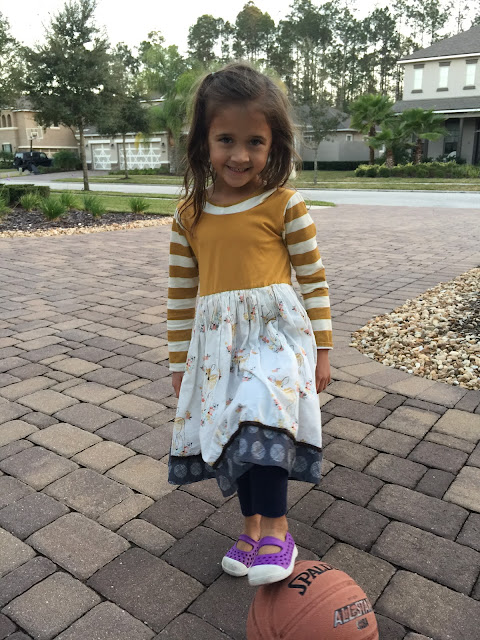 Posted by Shawn Vernon at 6:57 PM No comments:


Andrea and I went to the Doubles Boot Camp at the Omni Amelia Island Plantation this past weekend. We had tennis scheduled for Friday afternoon, Saturday all day and for three hours on Sunday.

Unfortunately, rain was in the forecast for Friday and Sunday. Thankfully on Friday, the rain was cleared up by noon and we got to do all the scheduled tennis Friday. Saturday was a perfect day for tennis. It was a little cool in the morning, but it was beautiful outside and Andrea and I got put together with some good groups. The tennis pros are always entertaining and we both enjoyed all the drills. At the end of the morning session, Andrea and I partnered up and we did a game across four courts with everyone. Each court had a challenger side and a champion side. To take the champion side you had to win 4 points and to stay on the champion side you had to win 2 points. If you beat three challengers while you were the champion, you would move up to the next court and become a challenger on the higher court. We started as challengers on court #3 and eventually moved all the way up to be the champions on court #1. We beat a number of good teams and stayed as champions for quite a while. When the game ended, we were challengers on court #1 and we probably could have gotten back to being the overall champions again, but time ran out. It was fun to be successful together, we made a good team.

After the game was done on Saturday, Sal took a group selfie picture. Unfortunately a girl up front decided to give Sal some bunny ears with her fingers and blocked Andrea's face. 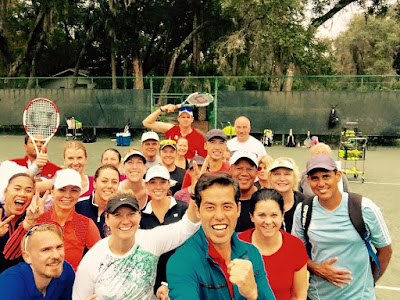 We enjoyed the Marché Burette Deli on the Omni property and ate there quite a bit for lunch. Unfortunately this time of year it's not open for dinner. We ate there for lunch on Saturday and then after tennis was done, we grabbed some ice cream and hummus before the cafe closed. We watched the Chiefs lose in their playoff game against the Patriots and then went to bed.

Sunday, it was rainy. They scheduled some indoor classroom type sessions and we felt bad for all the people that came in from out of town. I know a lot of them were bummed that the weather didn't cooperate and there were no indoor courts. Andrea and I talked to the pros and since they had another bootcamp scheduled for the following week, they let us plan to come back the next Sunday. We are looking forwards to getting in the last 3 hours of tennis time.
Posted by Shawn Vernon at 9:52 AM No comments:

Friends, Football, Pizza... and a Wedding! 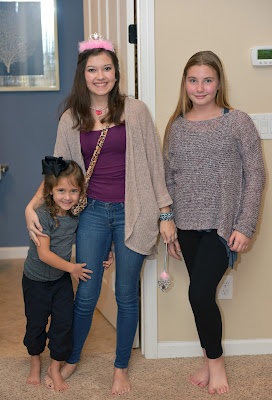 The Chiefs were playing in their first playoff game on Saturday night and we thought it might be fun to watch it with some friends. We invited the Tripps over and they also brought their son Nick's girlfriend Anna with them. We hadn't met Anna before, but we were so glad she came. Paige took an instant liking to her and Anna was so sweet and patient with Paige. Anna was like Paige's real life full sized princess doll. 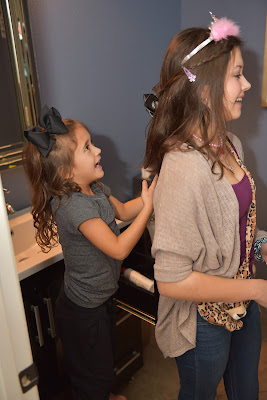 Paige made Anna extra pretty with a tiara, a fancy leopard purse, a bow, jewelry, and then Paige did her hair. Paige knows hair product is good for your hair, so obviously to her, the more the better. I took some pictures as Paige applied conditioner, detangler, and a terrible amount of hairspray. I couldn't believe Anna let her do it all, I was cringing as I watched, but Paige enjoyed it and definitely believed it was an improvement. 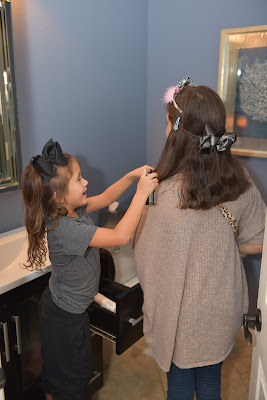 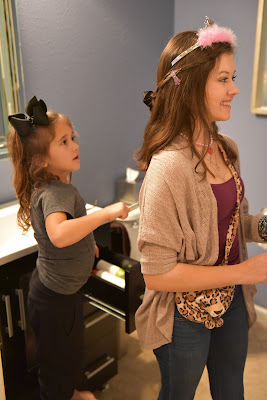 Once Paige was done with her hair, Anna put on the peacock feathers and then Paige walked her down the aisle so she could marry Nick. I took a video of the brief ceremony. Paige wasn't particularly interested in the wedding. Possibly because it was actually the third or fourth wedding of the night, but it was the first with so many witnesses, so I suppose this one was the legally binding official one. 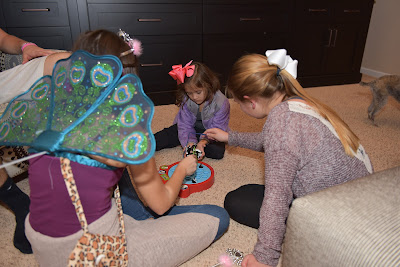 The boys watched the football game, and Connor and Nick played Madden mobile on their mobile devices and Madden 25 on the XBox 360. 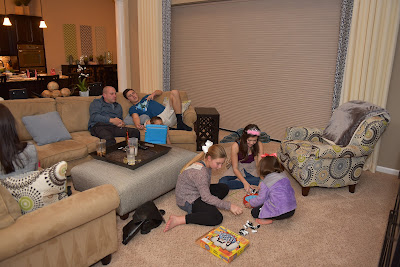 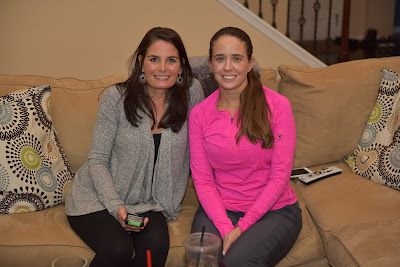 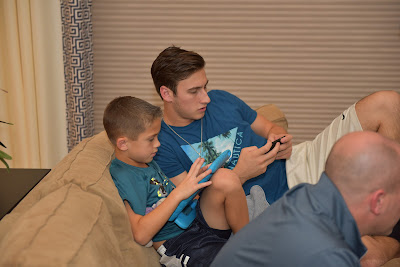 It was a relaxing evening and I'm glad the Tripps brought their kids with them. Connor and Paige had a great time with everyone and I commented to Andrea afterwards that I couldn't believe how well everyone got along and behaved. Connor tattled a few times on the Tripp children when they said "C-R-A-P", but other than that it was a perfect evening.
Posted by Shawn Vernon at 6:05 PM No comments:

Connor's first I9 Flag Football game of the year - Dolphins 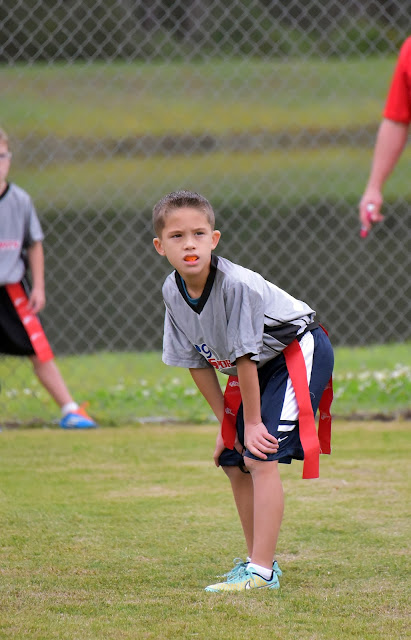 Connor's flag football started this past week with his first game against the "Broncos". Connor's team, the "Dolphins" have had a few practices and we think his coaches are really good. There are two of them and they definitely seem to know their stuff. They have worked on all kinds of flag pulling drills, running drills, passing drills, etc. The first game is always a learning experience, and I was really hoping Connor would have some opportunities to carry the ball and do his thing. I didn't need to be worried, his coaches seem to think he's a go-to player. The first three plays of the game went to Connor and he eventually ran for a touchdown on the first drive and first possession of the game.

The team they played against had some athletic players and they matched him up against their #11 player who was definitely the best flag puller. He stalked Connor relentlessly and Connor had a hard time shaking all the defenders. I took some pictures and some videos, but was not quite as vigilant as always and only got one touchdown on video.

At the end of the game, Connor scored three touchdowns and also corralled the other team's running back and forced him into the end-zone for a safety. The Dolphins weren't able to convert any extra points and Connor ended up scoring all 20 of his team's points. 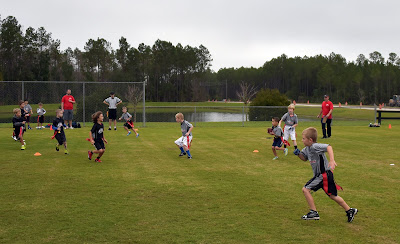 The Broncos did a really great job passing the ball. Although Connor got two interceptions, the Broncos managed a number of very good passing plays and on the last play of the game managed to tie it up. It was a little disappointing to end the game on a tie, but it was a good first game for both teams and Connor did all he could. 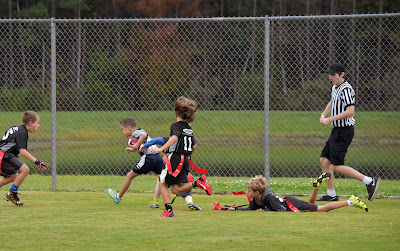 Paige, of course, enjoyed cheering on her big brother and looked cute and colorful in her "My Little Pony" jacket. 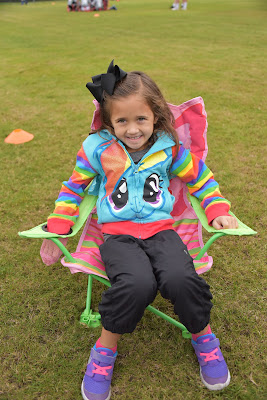 Posted by Shawn Vernon at 5:25 PM No comments: