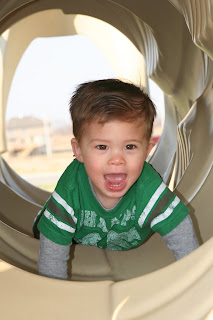 With the weather getting warmer we've been able to finally start going to the little neighborhood park again. Connor's got a playground at school and we were impressed at how well he gets around on everything now. He's very good at the slide, waits his turn, and sits down nicely when he goes down. He usually throws a fit when it's time to go, no matter how long we've been there, but it's so much fun you can't blame the little guy. 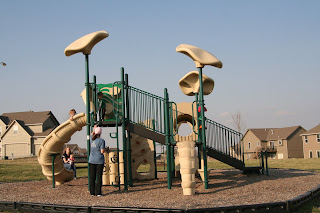 Going down the slide: 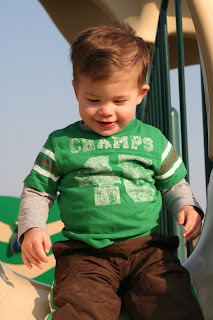 Banging on the bells: 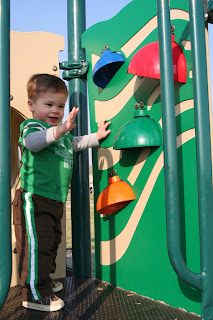 Big fork for the big boy

Connor uses full sized forks and spoons at preschool and now he's sick and tired of his plastic baby silverware. He insisted on using a big fork today and he was thrilled about it, so we got a few cute pictures of him in action with it. 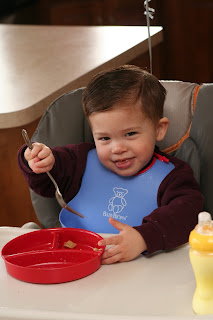 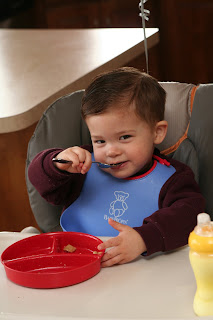 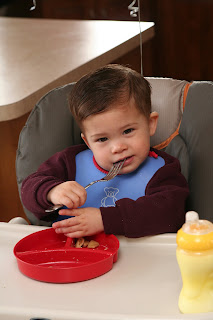 We were pretty worried about Connor for a while. He was VERY picky with his eating and for a long time hardly seemed to eat a thing. A few times this winter he got sick and barfed, and we got pretty concerned that he wasn't getting enough to eat. Well, we're not so worried any more.

For the last couple weeks he's had an insatiable hunger and never seems to get full. He's gotten a little less picky, though he still definitely has his favorite foods. His belly gets so huge and distended after he eats and it is as hard as a rock!

He's still fit into some of his 12-18 month clothes, but his belly's started to outgrow them and we think he's on the verge of a growth spurt. 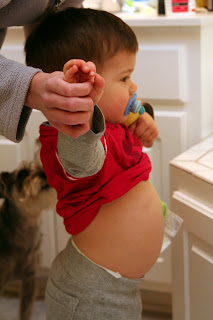 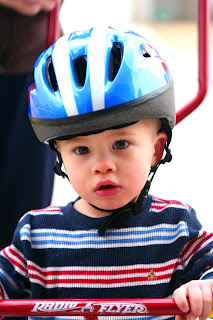 Connor rode his tricycle outside for the first time today. Mommy and Daddy got him it for his birthday, but we've only pushed it around inside since it's been cold outside and we didn't have a helmet for Connor yet. He was a good boy about wearing the helmet, and the tricycle's fun because Mommy and Daddy can push Connor on it and help steer at the same time. Connor's legs are still a little too short to work the pedals, but he loves to be pushed around on it.

His favorite outside toy is still the lawnmower though, he can't get enough of it. Daddy can't wait for Connor to push the real lawnmower! 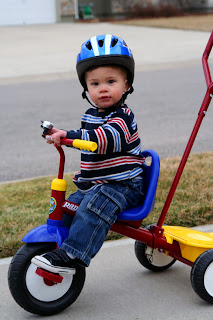 Connor's helmet fell off in this pic, and his expression's hilarious, had to post it. 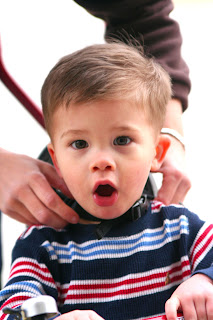 Connor went to see cousin Drew play basketball today. Drew worked his butt off during the game and Connor really enjoyed watching. It was the last game of the season and it was pretty intense stuff. 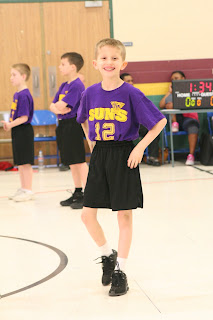 Posted by Shawn Vernon at 7:23 PM No comments:

Connor's first day at school on his birthday 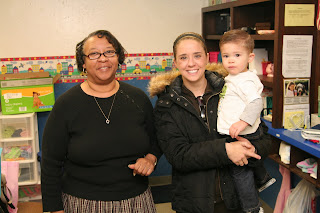 Connor's actual birthday is today, and it was his first day at school. To start in the toddler rooms, the children have to be two, so we waited until this day to start him at the preschool. It's a Montessori school and his teacher is Ms Leah. She's been teaching Montessori to young children for over 25 years and seemed to have a love for the work and definitely knew what she was doing.

Connor was very shy at first when we went into his new classroom, but he seemed interested in what everyone was doing and he didn't make any fuss after we left. He's in a small classroom with seven other children who are all between two and three years old. The other children seemed friendly and were all very cute.

We knew beforehand that he was going to have to drink out of an open top cup, serve himself his own food, feed himself and clean up after himself, but we were still surprised to learn that no bibs were allowed! We'd dropped him off in a white shirt (the same lion birthday shirt he wore at his party - Mommy did wash it) and were very pleased that he came home with it still white and mostly clean. We were a little nervous that no pacifiers were allowed, we've still been letting him use them when he sleeps and when he's in the car. Thankfully that didn't seem to bother him too much at nap time, Ms Leah said he whined a few minutes but fell asleep. Usually they play outside, even when it's cold, but today it was very cold and they didn't get to. We're interested to hear how Connor enjoys playing outside with all the kids, it's supposed to be much warmer the rest of the week.

It sounds like Connor loved school today. Ms Leah said he did great, and when we got home we noticed he seemed a lot more confident and energetic. At first wondered if it was just our imagination, but he's definitely more talkative and interactive than ever. We were hoping that more time with children his own age would be good for him, and he already seems to be responding to it. So far so good!

Connor being shy when we got to the school: 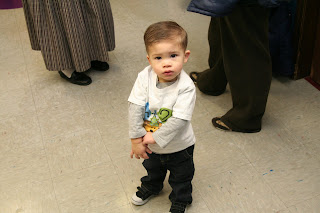 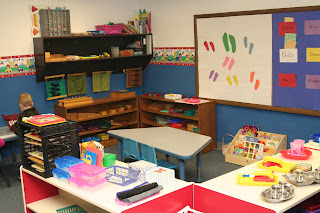 Yesterday we had Papa John's pizza, one of his favorite foods, for his birthday dinner. We wanted to get him something special tonight for his dinner and got him a happy meal from McDoanld's. He took one bite of his hamburger and then told Mommy "no". He's a very picky eater, so we weren't surprised that he didn't like the hamburger. He's not much of a meat eater. He would, however, eat the french fries. He ended up eating a small fry, green beans, banana, and yogurt. It turned out to be healthier than we thought. Happy Birthday Big Boy!

Connor turns 2 on Monday, and we had some of our immediate family in town this weekend to celebrate his second birthday. He has a stuffed blanket lion that he sleeps with, and he loves making lion sounds. It's his favorite toy right now, so Mommy decided that he'd love a lion themed birthday. Mommy did a great job planning his party and got him lion balloons, cupcakes, decorations, and a lion shirt.

Connor with his lion birthday shirt: 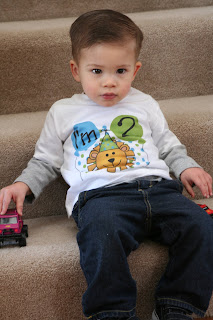 Connor giving a kiss to his lion blankie: 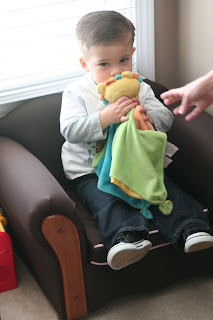 Connor with Mommy and Daddy before the big party: 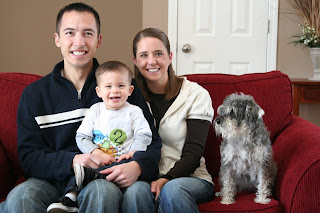 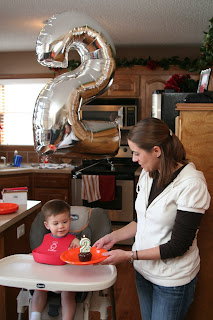 Pigging out on his birthday cupcake: 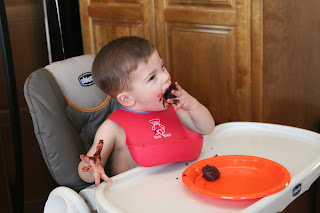 Mommy and Daddy with their little piggy: 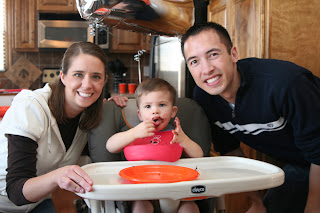 Connor got all kinds of great presents. We don't have pictures of him opening everything, but we wanted to post a few of the shots we got. Don't be disappointed if your gift didn't make the blog, Connor loved all his stuff, thanks everyone!

Connor and Drew opening up presents: 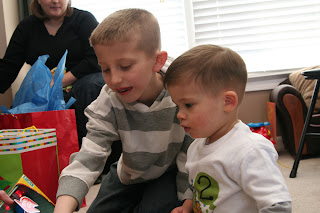 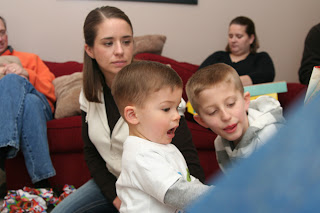 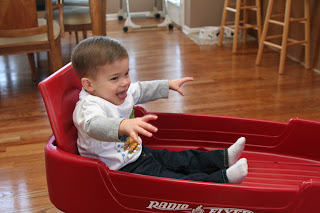 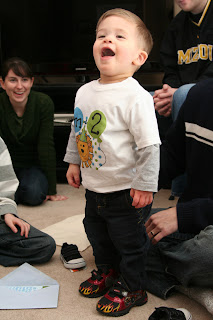 Connor and Mommy with the lion decorations, tried to get them all into one photo: 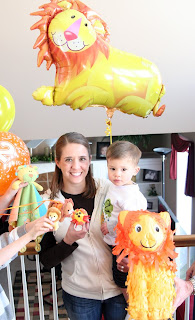 The lion cupcakes that Mommy and Daddy made: 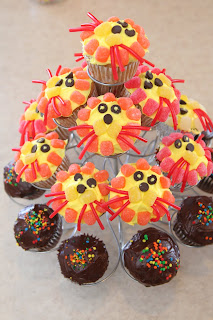 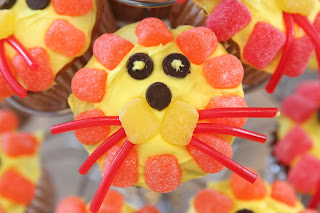 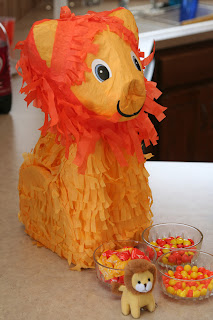