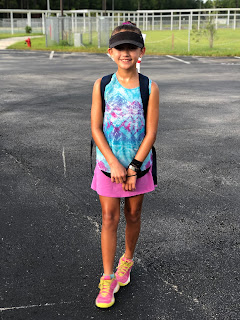 This morning I took Paige to Bartram High School for a Level 7 Orange Ball tennis tournament. There were 6 girls in her division and they were all pretty experienced and solid players.

Paige started off against a very sweet girl that she's played before named Molly. They split the first two sets and then played a 7 point tiebreaker. Paige had the lead at 5-4 but unfortunately lost the next 3 points and lost the match. She was pretty upset but jumped right in to the next match. She ended up winning 1 of her 3 matches today. Paige had a wonderful attitude and was working on her 4 F's: Footwork, Focus, Form, and FUN!

I don't think orange ball plays to Paige's strengths and we're getting closer to getting enough orange ball tournament points that she could move up to green ball. Orange ball has a smaller court, so although Paige is able to direct the ball around the court fairly well, it's such a small court and the ball moves so much slower that it's hard to really hit it away from your opponent without hitting it out of bounds. Paige is super fast too, so I'm pretty sure that once she moves up to green ball it will be good for her.

Posted by Shawn Vernon at 8:00 PM No comments: 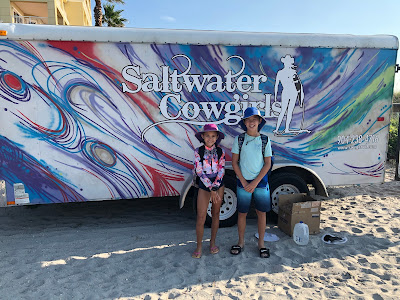 The kids went to Surf Camp this past week with the Saltwater Cowgirls. They typically just do camps for girls, but offered a co-ed camp last week so both kids were able to go. The kids love to play in the ocean, but they've never tried surfing before. Andrea had heard good things about some of the local surf camps and had done some research on it. She was excited for them to experience it, but neither one were very interested beforehand. They both were a little nervous to be out very far in the ocean and were not looking forwards to it.

We were happy to hear that after the first day they both loved it. They looked forward to the camp all week and actually asked to surf over the weekend too. On Thursday I took my camera to the beach and snapped a few pics and a couple videos. Unfortunately while I was there, the waves weren't great and I didn't capture their best moments, but still got a few nice pictures. 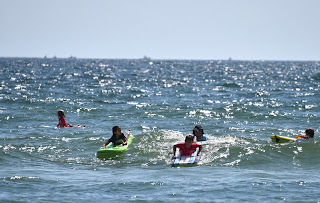 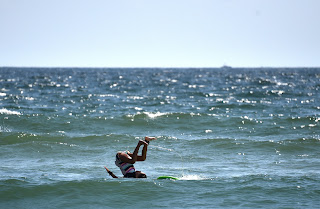 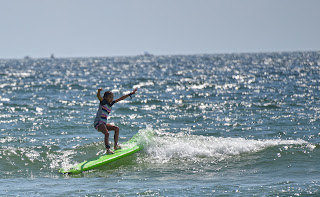 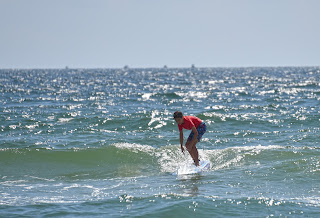 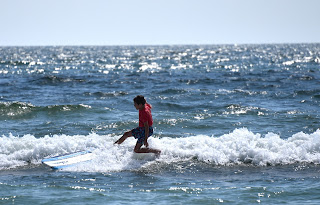 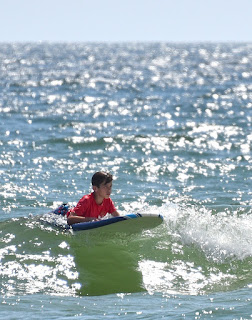 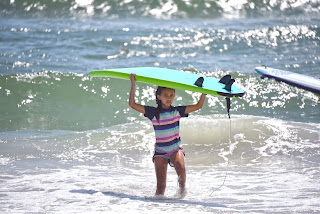 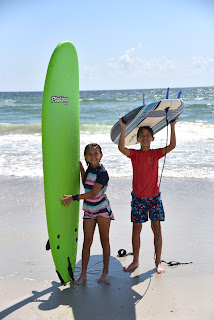 Posted by Shawn Vernon at 7:32 PM No comments: 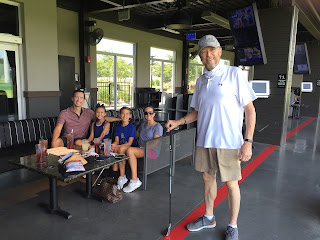 On Sunday we met Grandma Alice and Grandpa Rick at Top Golf for a couple of hours of golfing fun. The previous week, Connor finished his third golf camp week and Paige finished her second. They both have been enjoying the golfing and are always begging to go to Top Golf so they can practice what they've been learning. I was excited to go too and try out some things I'd been instructed on during my private lesson a couple of weeks ago.

Grandpa golfs from time to time with his friends, and he did pretty well hitting the ball consistently. Grandma has never hit a golf ball before and it was fun seeing her try to figure it out. She started with a pretty unconventional grip, but she figured it out pretty quickly and by the end of the first game she got quite a few points and hit a few balls pretty far.

We got some snacks and Paige was pumped that they had their injectable donut holes available this time so we got to try them out. They were pretty messy, but we actually thought they were super yummy. 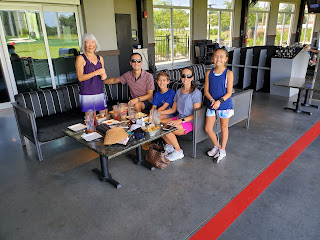 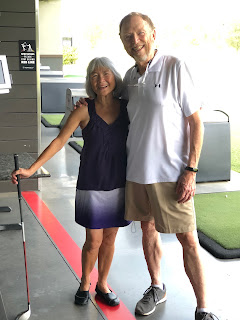 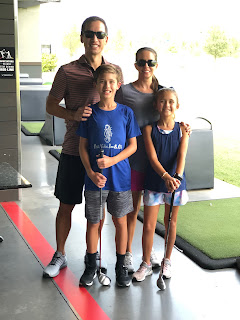 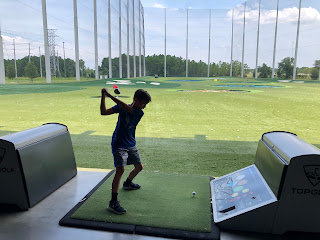 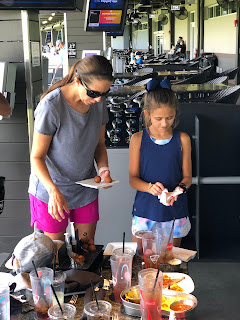 Posted by Shawn Vernon at 5:40 PM No comments: 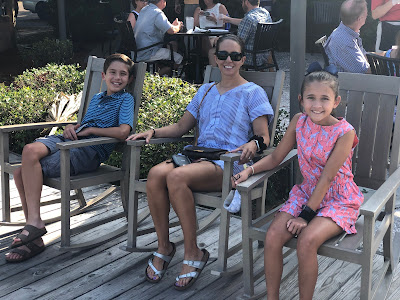 On Saturday we did our normal weekend routine until the evening when we drove to Amelia Island Plantation to have steak dinner at Marche Burrette. It was a little warm out and it was fairly busy at the restaurant, especially since we wanted to sit outside and be apart from other customers as much as possible. We enjoyed our dinner although the flies were a little aggressive and it started pouring rain about halfway through our meal. We carried our food to the covered area and thankfully another party had just departed so we were able to be re-seated and eat our food before it got too cold. 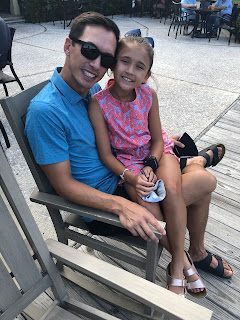 Posted by Shawn Vernon at 4:48 PM No comments:

Four Seasons with the Neals for July 4th

Saturday was July 4th and we went to Orlando to stay at the Four Seasons on Friday since I got the day off for the holiday. The Four Seasons has been closed since the COVID outbreak and they opened back up on July 1st. The Neal family also went for the weekend and it was fun to have some other adults to talk to and for the kids to play with.
The hotel did a very extensive job setting up precautions for COVID and we were pretty impressed that everyone was consistently wearing masks in Orlando. The hotel had checkpoints at all entrances where guests were scanned with an overhead camera system with a temperature reading. We saw lots of staff cleaning more than normal and they were all good about wearing masks, even outside in the heat. We avoided indoor areas as much as possible and spent most of our time outdoors at the pools and lazy river. We ate lunch at PB&G's on the 4th with the Neals, and we ate dinner at the outdoor seating for The Lobby Bar. The kids enjoyed hanging out with Owen and Charlie until it started raining in the afternoon on Saturday. "Hamilton" was released on Disney+ for the 4th of July and we watched it in our room on our Apple TV. It was a neat way to learn a little history on our nation's birthday. 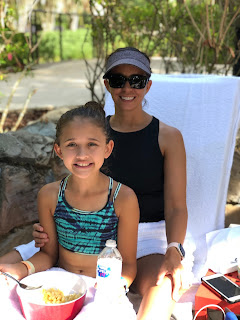 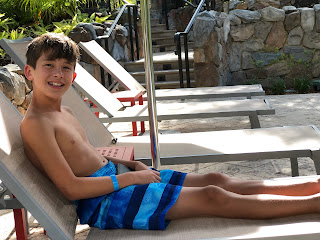 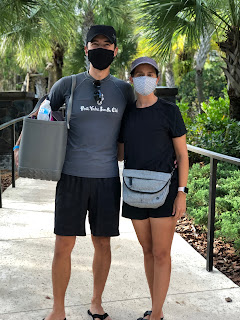 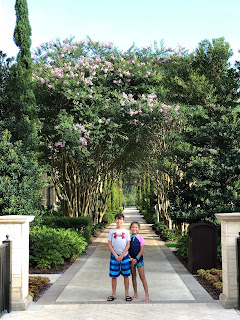 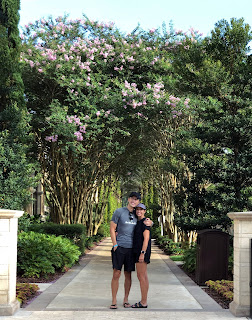 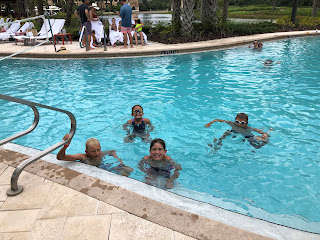 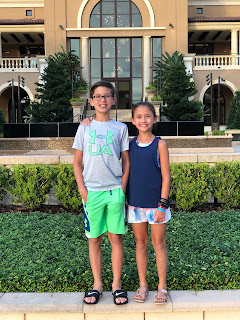 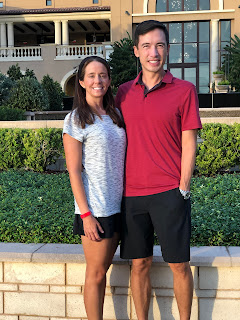 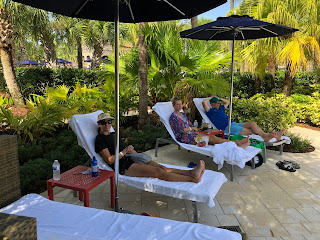 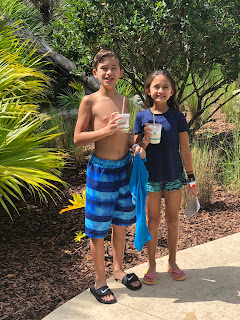 Posted by Shawn Vernon at 4:03 PM No comments:

Connor did tennis camp in our neighborhood this past week and Carter and Quinn were there as well. Andrea snapped a pic of them together at the courts. Paige did tennis in the neighborhood at first, but we switched her to the tennis at our club since the neighborhood clinics were pretty crowded for her age range. 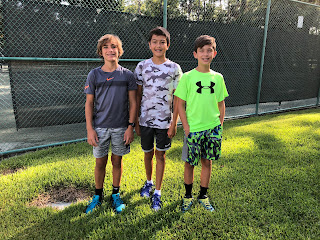 Posted by Shawn Vernon at 3:48 PM No comments: