Today while Mommy got together with the girls, Daddy took Connor and cousin Drew to Fun Run to have some fun. We heard they had fun there and we like fun. Now, Daddy feels somewhat stupid to admit this, but for some reason he was surprised when he got there. He knew there were big inflatable apparatuses to play on and he knew there would be children playing on them. However, for some reason he was unprepared for the incredible noise and chaos created when hyper children are running around unsupervised. He should have expected to see children running and having fun (It is named Fun Run), but he had what apparently was an unreasonable expectation that some parents would take it upon themselves to watch their children.

When you get there, you sign away your rights to sue the facility, then the children remove their shoes and are turned loose. There were four large inflatables, an arcade, and a hall filled with themed play rooms (car room, kitchen, beauty salon, etc). As I was signing their paper, absolving them of any liability, I asked the lady working there how it worked. She told me that it was "free play" and I could order food at the counter. That's all there was to it. The employees all worked behind the counter and it was survival of the fittest in the play areas. There was nobody telling the kids when to go down the slides, or whether it was a good idea to climb them while others were going down. The kids (and parents) seemed to believe that since they were playing on inflatables that they were invincible. They were jumping (often headfirst!) from incredible heights and didn't seem to notice or care if there were other children they were landing on.

Connor was pretty overwhelmed with the situation and was more clingy than ever. Although it was an absolutely crazy environment I really think it showed that he will benefit from socializing with larger groups in preschool. We ended up finding some less crazy areas to play in, Drew and Connor had a good time, but poor Daddy was fairly traumatized by it all. 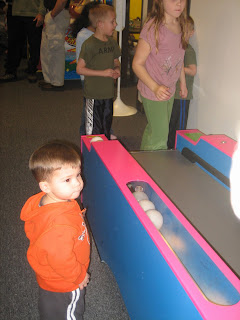 One of the smaller play rooms (car theme): 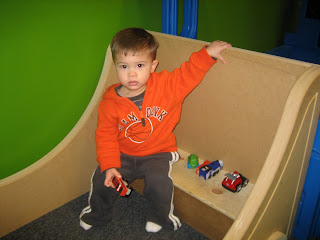 The typical parent supervising their kids (No idea how he can sleep with all the noise): 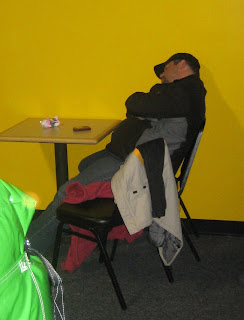 Drew going down a slide:

Hmmm. Fun. Glad you were there to keep an eye on things.
GPV

Fun=fun times for the kids

Run=parents who want to just run far, far away from this place

I'm sure the boys enjoyed it though even though you were subjected to high levels of insanity! ;-)