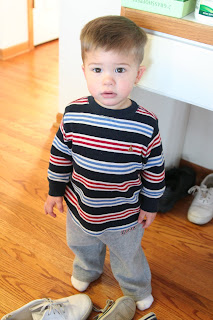 We've been considering what we should do for Connor's pre-school for a while and recently made a big decision for our little man. We initially planned to take him to a pre-school a couple days per week once he turned two. We were going to keep him at Jenny's two days/week, at pre-school two days/week and at home with Andrea one day/week. But, as we started looking around at schools we really thought he would get a lot out of the experience and the more we considered how his routine would be affected by going part time we made the decision that maybe it would be best to take him full time. We were a little concerned about having three different daily routines and schedules; especially with potty training beginning soon.

We looked at a lot of places and researched the Montessori concept of child development and liked the fact that in some schools all the teachers were Montessori certified. We settled on a school that's fairly close to our home and on Connor's second birthday he will start his first day of school.

We're all pretty nervous about the big change, but we're very certain that Connor's going to enjoy it. He had a great time touring the schools and already got upset when the tours ended and he couldn't play with all the toys and kids.

Connor's grown up a lot in the last few months. We took down the last baby gate and Connor's free to go anywhere in the house he wants. He's very good with the stairs and we hardly worry about him at all anymore. He had some vomitting issues last week, but he's been doing much better since Thursday. He's still fussy a little at dinner time (unless it's pizza night), but he's feeling a lot better after last week and he's got his appetite back.
Posted by Shawn Vernon at 5:35 PM

wow what a big step for Connor. will he be there a whole day every day? how many hours?