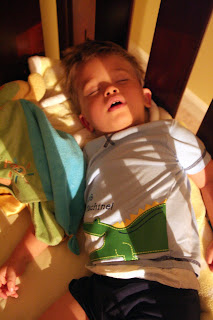 Connor's been very good about going to bed lately. We've got our nightly routine where we brush his teeth, put him in his pajamas, read 3-4 books and then tuck him in.

Brushing teeth is getting better. For the last few months, it would typically consist of a parent straddling him on the floor, pinning both his arms to his side with our legs and then forcing the tooth brush into his mouth. His gums have been sensitive with teething, and he absolutely hated tooth brushing until recently. Now, we have some toothpaste that's fluoride free so if he swallows it, it's not a big deal. He actually does some of the brushing himself and then we finish up.

Another fun routine recently is getting him in bed. He used to throw a bit of a fit when you put him down, but Daddy figured out that if you tuck his lion in first Connor will want to also get into bed. We hold Lion and talk to him, give him hugs and kisses, then put him down in bed and put the covers over him. Inevitably, Connor is watching with wide eyes and if you ask him if he wants to go to bed with Lion, he'll say "Yes!".

One last note, notice that he's sleeping now without a Nuk (Pacifier)!
Posted by Shawn Vernon at 8:19 PM