Connor playing around the house 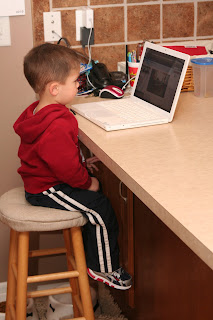 It's been tough not being able to play outside this winter. Connor's found some fun stuff to do around the house though. He likes to play on Mommy's computer and watch videos (mostly of himself on the blog).

He really likes to play with the tickle box, Mickey Mouse, his train table, cars, his "guys" (Little people toys), and balls. He was kicking one of the bigger balls around the house the other day and decided that it would help if he used his hand to pull his leg up. It was pretty funny so we took a video of him doing it.

Cute. Lifting that pant leg up really helped too!
GPV