Our so real great guy 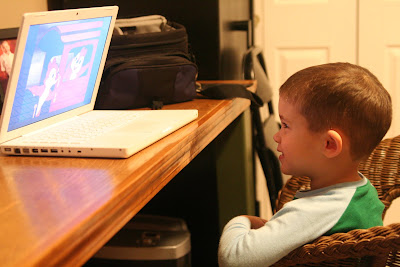 We've done a lot of posts recently talking about all the things Paige is up to and decided to do a post with some updates about our little man.

Connor has been learning all kinds of things from school and from some of his favorite shows. From school, he's gotten very good at counting and also is really in to patterns. Every day when Daddy drops him off at Ms Rachel's house we discuss whose turn it is to get out of the car first, Connor or Paige. He always tells me that it's a pattern. Just tonight he was telling us that he should get to take a bath since he had a shower earlier in the weekend. He said it should be a pattern: Shower, bath, shower, bath.

He's always interested in whether there's going to be school the next day and will say "No school for day?" (meaning tomorrow). He used to be pretty whiny about getting dressed for school, but recently Daddy's made it in to a race and Connor is always eager to be the winner. He takes off his pajamas, goes to the bathroom and gets dressed completely by himself now.

He's really been in to watching cartoons on Youtube lately. He likes the old Mickey Mouse cartoons from the 30's and 40's, Bugs Bunny cartoons and also some newer Mickey Mouse cartoons from the late 90's. We have a variety of playlists and he watches them on the computers. He also learns some funny phrases from his shows, he will usually say "Aw phooey" like Donald Duck and "Hey, what's the big idea". Another phrase we hear a lot is "so real", we're not sure where he picked that up, but he uses it a lot. Usually as in: "This game is so real fun" or "That guy is so real bad". We've found ourselves using it lately too, it's so real easy to get in to the habit of saying it.

He plays with all kinds of toys now. He still plays with some cars, including his criss-cross-crash and slot car race track, but has been very interested in action figures lately. He got a number of them for Christmas and likes to tell all kinds of stories with them. We typically name the action figures after people he knows including Mommy, Daddy, Paige, Connor and kids from school like Logan, Brady, Miles, and Chase. His favorite story involves all of them playing football together.

He likes video games, however he tends to struggle with most of the controls. It's got to be hard because of all the different ways you can control games these days. He does pretty well playing a "Muscle Truck" car game on Daddy's phone and just this last week Ms Rachel sent us a picture of him driving Mario Kart for the first time. Driving games are definitely his favorite. 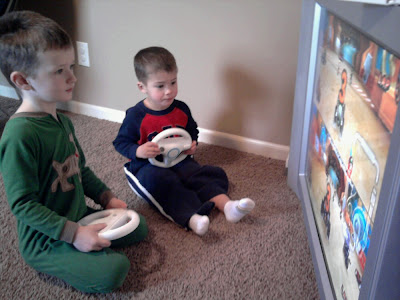 We love our little guy and we're so real lucky to have such a sweet son!
Posted by Shawn Vernon at 10:40 AM