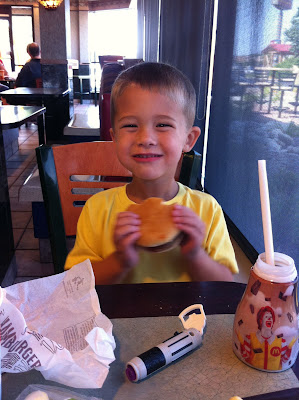 It doesn't get much better than McDonalds when you're a kid. We've taken Connor to great restaurants all over the place, but nothing beats a hamburger from McDonalds. On Friday, Daddy and Connor went to get their hair cut and Daddy told Connor that if he did a good job, they'd go to McDonalds afterward. Connor played on the iPhone the entire haircut and although he jerked his head once while playing a motorcycle game, he sat quietly and cooperated.

Daddy and Connor went to McDonalds and originally planned to take it home, but Connor wanted to eat inside. We got him a happy meal with a toy lightsaber (his new favorite toy that he brings everywhere) and he was thrilled with his treat. He told Daddy "This is the best picnic ever!"
Posted by Shawn Vernon at 9:07 PM

Awww. What a great, happy smile!