Connor has done quite a bit of artwork at school, but it's not something he really enjoys doing at home with traditional materials. He will make cute birthday cards for people, and he does a nice job drawing, but he doesn't really ever color much or use much color in his traditional art.

What I realized the other day is that Connor's medium of choice is Minecraft. He's been playing Minecraft on our Xbox 360 for a while now and he's kind of gotten bored with the Survival mode and has moved on to the Creative mode of the game. In Survival mode, you hunt for treasure, find food, and have health and can die. In Creative mode, your character is invincible, has unlimited resources, and can fly around the map to build whatever you can imagine. Connor and his friends will spend hours building elaborate structures and bringing to life anything they can imagine. The construction process is extremely tedious at times and the boys will place each block individually kind of like a pixel in three dimensional space. They will fly around the maps, carefully arranging their materials so the building will have the proper colors, lighting, and materials to achieve whatever they're planning. They will build special structures to house their dogs, horses, or livestock. They have constructed enormous skyscrapers with rainbow colored exteriors. Connor has a foam sword from his game and recently created a big model of one in the game with the exact dimensions, but using different colors that he thinks looked cool. 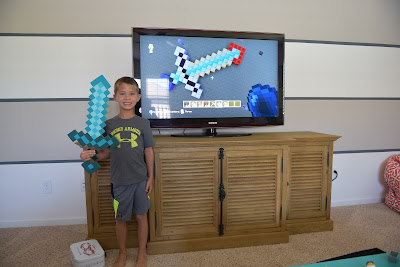 One of the cutest creations Connor made is a food village. It's a bunch of houses modeled after the different foods that your character can eat in the game. The houses are modeled in three dimensions and in correct colors and they all have various levels and even basements. Most of them are not yet furnished with beds or decorations inside, but the outsides of the houses are the cute part. Connor took me on a tour.


Connor also made a soccer field and a football field. In the pic you can see the football field with other structures behind it. It's at night in the game, so it's not all really well lit, but you may be able to make out the words "GIANTS" and "JETS" in the end-zones. 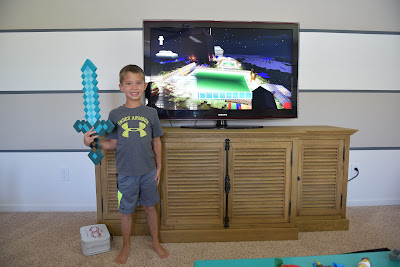 Next, Connor showed off a jail that he made, filled with inmates and then a giant Creeper. The Creeper is a "mob" or creature in the Minecraft game that wanders around and if you get to close to it, it explodes in a powerful blast that will kill your character and destroy all the blocks around it in three dimensional space. Connor stacked a bunch of blocks to make a giant statue of one. 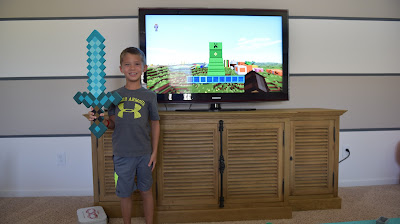 He's so cute with his game, I'm always impressed with his devotion to detail and with his patience as he constructs things. Recently he takes requests from Paige and she will lie on the couch next to him as he works. He's been working on a big wedding venue with hot tubs for her. I love my creative little man, I can't wait to see what he comes up with next.
Posted by Shawn Vernon at 8:31 AM