Pond drained and other weird events

This past week had its fair share of weird events. A flying squirrel got in to the attic, our gas tank floated out of the lawn, our lawn guy quit, and our pond got drained by accident. Tropical storm Colin came through on Tuesday, which caused our newly placed but empty gas tank to float. They eventually came back a couple days later and anchored it down and filled it up. 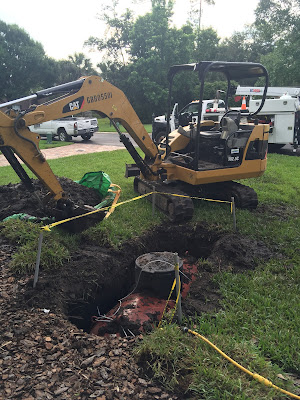 The weirdest event though, had to be the pond draining. On Wednesday, after the tropical storm, we were going to bed and Andrea mentioned to me that the pond seemed pretty low. I had actually been researching flood zones and thinking about storms and flooding after the storm had come through, so I was a little bit pleased at the news. I figured they were draining the pond a little since it had gotten pretty high after all the rain.

The next morning, I got up and was stunned to see that almost all of the water was completely gone. I went out and took a few pictures and a video of all the fish flopping around and birds gobbling them up. In the video, you could see many ovals in the water, which are the backs of the fish out of the water. The larger fish couldn't even submerge completely.


As I stood there, a worker in a golf cart started to drive past and he did a double take when he saw the pond and immediately came over. He hurried to a switch box, flipped off the pump, and called his boss. I went around the pond and listened to his call and then talked to him. Apparently a timer hadn't shut off on the pump and it ran all night long and drained the pond almost completely. I asked if they could just pump the water back, and unfortunately that's not an option in our pond. They set up a small garden hose, and let it run. I went around the pond and took a few more pictures. I figure we'll likely never see the pond empty again. 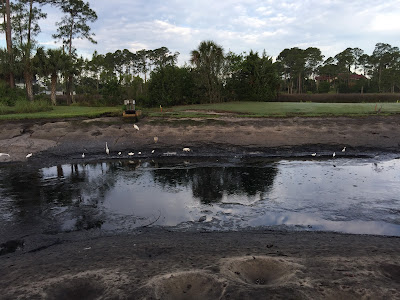 There were dozens of bowl shaped areas around the bank. Apparently they were all fish homes and at the bottom of each were dead baby fish. 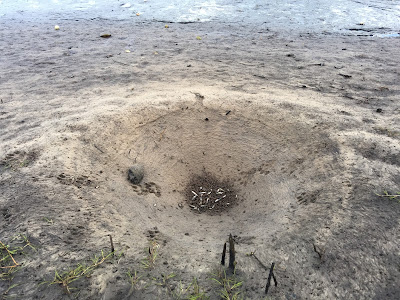 I took one more picture a few days later as the water was starting to fill back up. That day, most of the remaining fish had gone belly up. I am not so sure that hose water was the best thing for them. I counted over 30 big floating fish and there were dozens of birds. The pond had started to stink, but the vultures did a great job cleaning everything up.

The whole thing was terribly sad. It had to be a nightmare for all those fish to die that way. We are heartbroken because the pond was always a beautiful sight and filled with wildlife. I hope it comes back to life soon. On the positive side, it was a good opportunity to meet some neighbors. Everyone around us heard about it and saw what happened. A few neighbors came by to see the pond and to ask what had happened. Two of the gentlemen who live nearby are on the HOA and are in charge of the ponds in this area of the neighborhood. We were happy to hear that they were aware of the issue and were trying to help get it fixed. The manager for the golf course also tracked down Andrea's number and yesterday gave her a call to apologize and to let her know they would try to make it right.
Posted by Shawn Vernon at 7:20 AM