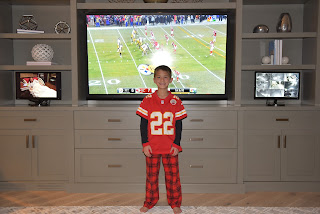 This year, Connor got in to his football a bit earlier than he has in the past. He followed all the teams, players, and especially the Chiefs. We only got to see them play once in the regular season since we don't have any NFL packages with our TV, but Connor has been a big fan. He got his Chiefs jersey from Grandma Genie for Christmas and wears it every chance he gets. The Chiefs had a bye week for the first week of the playoffs, and we watched all the games and were excited to see the Chiefs play at home against the Steelers. Connor was nervous about the matchup since they'd lost to them earlier in the year. Sadly, the Chiefs didn't do well against the Steelers in the playoffs. The Steelers couldn't get a touchdown, but they got 6 field goals and the Chiefs couldn't get the two point conversion at the end of the game to tie it up. Connor was absolutely heartbroken and it was disappointing to see him so let down. He could barely watch the game at certain points because he was so nervous, and when they couldn't convert the two point conversion he was devastated.

Connor's still been wearing his jersey and is still watching football, but he's definitely not as interested as he was when the Chiefs still had their shot.
Posted by Shawn Vernon at 7:18 PM