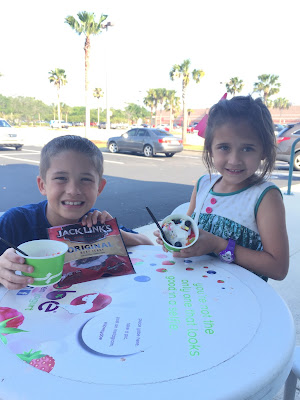 We ordered a few things for the kids to reward them for doing well in school. Right now, fidget spinners are the popular and exciting toy. They're essentially little bits of metal and plastic that spin on a bearing. We ordered a few on Amazon and didn't realize the shipping was from China or something. The projected delivery date isn't for about 3-4 weeks from when we ordered them. Connor begged me to take him shopping this past week, so we took the opportunity to do a little shopping.

We went to Target first, and there were no fidget spinners to be found there. I was Googling where we could find some when Connor finally remembered that a few of his friends had purchased theirs at 5 below. Paige bought some toys with her leftover birthday money, and then we went to Yobe on the way to 5 Below. Paige had seen some commercials about Yobe and had been begging us to try it. We all got a bowl, and Connor and I were underwhelmed. Paige enjoyed it, but I think it was mostly the candy and fruit she liked, not the frozen yogurt.

After Yobe we went to 5 below and both kids bought fidget spinners. We opened them up and tried them before we left to be sure they worked, and Connor was so excited about his that he went back in and bought another one straight away. I'm glad they got their spinners, they've been very good kids and earned it.
Posted by Shawn Vernon at 4:30 PM