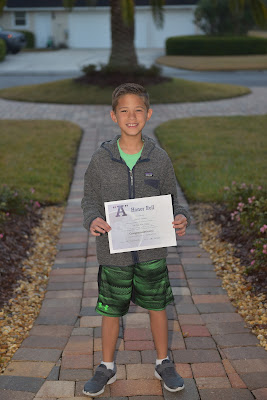 Connor has been doing awesome in school lately and got all A's again in the second quarter. This last week, he also got the "Kid of Character" award for "Respect". We are so proud of Connor, and he has been so cute trying hard and doing his best. On Wednesday, I went to wake him up and he surprised me by already being dressed and awake. He was faking being asleep under the covers, and I he cracked up when he surprised me. He said he's set his alarm for 6:20 and he'd already gotten up, gotten dressed, eaten breakfast, brushed his teeth, and was ready to go! I told him he needed his sleep, and I asked him why he set his alarm. He said "I've got to push myself!"

We were impressed with him, but told him in the future that he shouldn't be setting his alarm. It was pretty cool and definitely a funny surprise.
Posted by Shawn Vernon at 6:20 PM