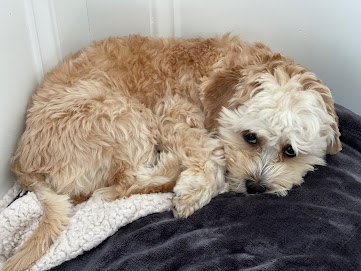 Millie Mae has been enjoying our summer routine so far. I typically like to jog in the neighborhood, but it's almost impossible this time of year due to the aggressive yellow flies. I'm not sure why, but they seem worse than ever this year. Millie's been going to the beach with me a few times a week to jog in the sand and she really loves her time running around and exploring. When I'm working she spends most of the day with me and I've given her a little more freedom lately to relax in different places in the office.

Recently we've been trying to give her more freedom overall, but she's still so odd about her poops and pee. She really likes to go on the rug in the master bathroom and loves to sneak in to my bedroom to poop behind one of the chairs. I don't get it because we always congratulate her and encourage her to go in the right places on the puppy pad or outside, but she isn't consistent or trustworthy yet. We still like her despite it, but it is definitely getting old.

This past week I trimmed the hair on her ears and tail. The groomer had left those areas long for some reason and it actually looked awful. We like her hair to be a more consistent length throughout and now that it's growing out a little she's looking cuter every day. 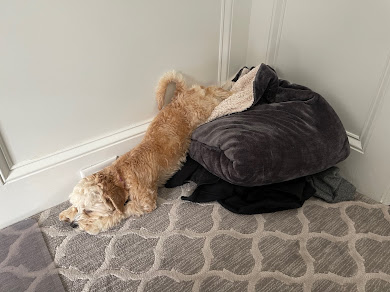