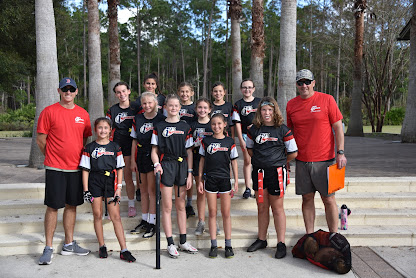 Paige's I9 Flag Football team had their first game this afternoon. They're an all girl team and there had been some expectation that there would be other girl teams but it turns out that many other girls signed up for a different league so Paige's team is stuck playing with a bunch of boy teams in I9. They've had a few practices and today they had to put it all together. They came out a little hesitant, but as the game progressed they got more aggressive and loosened up. The girls were split in to two squads and Paige's squad was on defense the first half. She pulled the first flag of the game and was pretty good on defense. Unfortunately the boys they were playing against were experienced players and they scored a few times.
The second half, Paige's squad was on offense and they moved the ball well, but they were down by quite a few touchdowns and hadn't quite made it in to the endzone. It looked like the girls were going to be shut out with only a few seconds left in the game when the coach decided to give Paige a handoff on the final play of the game. Paige turned up the afterburners and juked four defenders on the way to the endzone. Her teammates were so cute about cheering for her and congratulating her. I'm sure Paige will always remember her first touchdown. 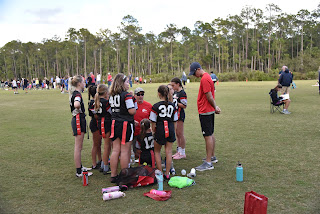 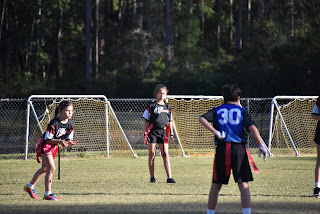 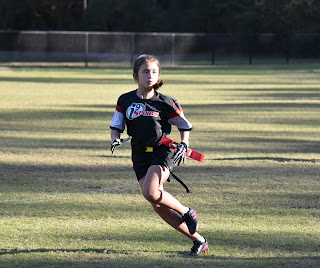 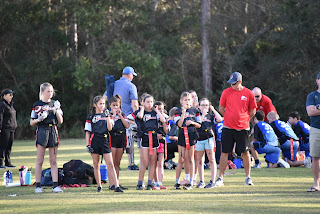 Great job Paige and great job to the team, they're off to a good start! 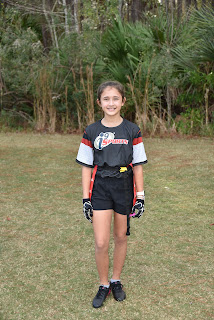