Physics with Connor and Andrea 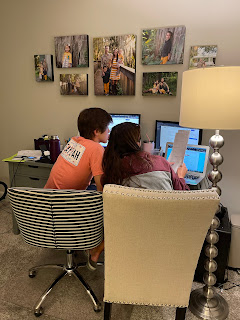 Connor's taking honors level Physics online and he's been doing well for the most part on his own. The material is definitely complex and more difficult than any classes that Andrea and I took when we were in high school. While we did get Connor some official tutoring, Andrea and I have tried to work through some of his lessons with him, with varying success. Andrea buckled down with him this last week and she actually spent hours on her own learning the material so she could explain it to him and understand it herself. It was an impressive feat and she was able to help Connor out a lot on his assignments and some of the work that needed remediation.