It's been a little while since we updated the Blog. It's because we decided to save a little money and ended up with a bit of a disaster. Connor's been eating Enfamil formula for a little while and it's fairly pricey at about $25 per can. He's been going through the cans pretty quickly and one of Shawn's friends said that the Target brand formula is exactly the same as the Enfamil. I've watched some shows on generic brand foods and have heard of instances where the store brand is exactly the same as a name brand, just without the fancy label. Case in point is the recent debacle Peter Pan peanut butter went through. They had a salmonella problem, and as a result so did Walmart's 'Great Value' peanut butter. It came from the same factory, it was the same thing, just in a different container. (Story about the recall)

Well, we assumed that maybe it was the same case with the generic Target stuff. We compared the nutrition labels, and everything was identical point for point. That, along with the glowing reviews from our friends, and the fact that it was half the price of the Enfamil convinced us to give it a try. Who wouldn't want to pay half the price for the same product? Well, upon opening the can it should have made us stop and think. The formula was much more powdery and had a yellowish tint instead of a white tint. Instead of thinking about the problems that may result from switching a baby's formula, I was thinking about how clever I was for saving so much money.

The next week was one of the most difficult we've had since Connor was born.

He had really gotten much calmer in the last few weeks and had been sleeping better. About a day after we switched formulas he started waking up in the middle of the night and throughout the day would be nearly always on the verge of throwing a fit. He was burping more, spitting up more, and passing gas often. You would think the cause might be obvious, but we hadn't really considered the formula change to be noteworthy since in our minds it was identical to what he'd been eating. Also, we were all exhausted from Connor's crying and weren't thinking about much besides trying to get through the days.

On Thursday (the 21st), as I was trying to console our shrieking baby, I connected the dots. We switched him back to Enfamil minutes later and he's been better ever since. Since we had already switched him, we decided to go with Enfamil's Gentlease LIPIL instead of the regular stuff. It's supposed to help with fussy babies, and since he's been on it, we've had much much more peace. 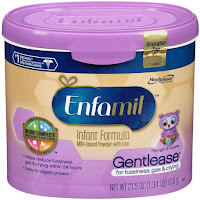 A few milestones recently. Connor's figured out how to roll from his back to his stomach. Since he was two weeks old he's been able to flip from his stomach to his back, but back to stomach is a bit harder.

Here he is, showing off for mommy:


Also, he really enjoys standing up if you'll help him. He really gets a kick out of it, and so do I: One last note, Connor's left ear has always stuck out a little bit since he was born. It's not really that noticeable unless you look at him straight on. Most doctors in America seem to think that it's not worth messing with until the child is 5-6 years old. Also, most seem to think surgery is the only option. I looked into options and found a doctor in the UK that developed a kit that could potentially fix the ear without surgery. It's pretty much just a bit of material that shapes the ear and some tape to stick it to the side of the baby's head. It's a little bit visible in the picture above. Since the baby's cartilage is still soft and developing it's a good way to help mold the ear. It wasn't a major problem, but we thought it was worth trying to solve early if possible. Info on the kit: Ear Buddies
Posted by Shawn Vernon at 7:37 PM

Omigosh - Connor is getting to be such a big boy, with so many milestones and accomplishments - he looks adorable in the video showing off his physical prowess. That ear buddy looks like it will do just what he needs, and I'm glad you found a method that is non traumatic for the little guy. Andrea sure did you proud, Shawn.

Wow! This guy is going to be an acrobat. Getting stronger. All he needs now is to have his grandparents spoil him a little --- heh heh heh.
GPV