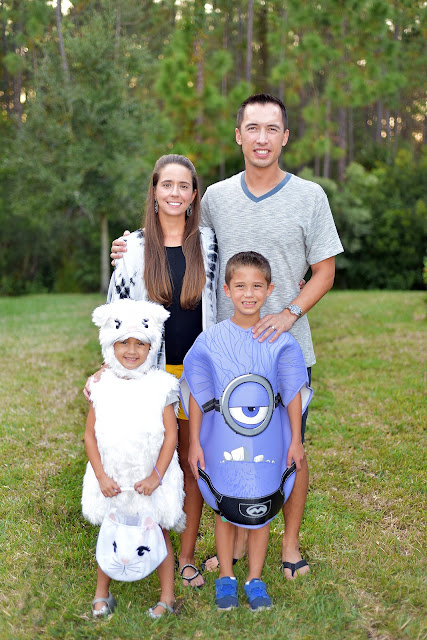 This year we were lucky that Halloween fell on a Saturday. In the morning, Andrea and I participated in a Halloween tennis mixer at PVIC, then we had lunch at Cantina Laredo and relaxed until around 5. Before we put the costumes on the kids, we took a pic of them with the Halloween decorations on the front porch. 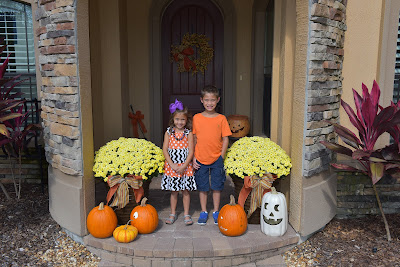 Connor went as an "Evil Minion" this year. Andrea and I came across a really cute Pterodactyl costume at Pottery Barn Kids, and it looked cute on Connor, however it was maybe a little bit of a little kid costume and Connor really wanted to pick one out this year himself. We took him to a Halloween store and he really liked the purple Minion costume. We found it online for sale for $10. It was a little sad that we weren't able to dress up our little man this year the way we wanted, but we were happy he got to express himself with a costume he picked, and it was nice that it was definitely cheaper than the Pterodactyl costume as well. 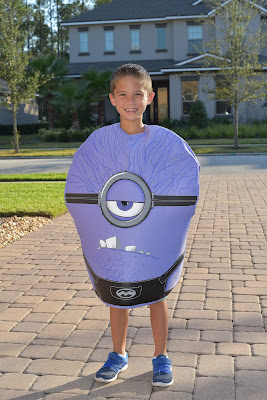 Paige went as a kitty cat this year. We found her costume at Pottery Barn kids, and it was super cute on her. Thankfully she didn't have any other ideas for a costume and was more than happy to be a kitty. She was cute posing with her hand out like a cat claw in some of the pics. 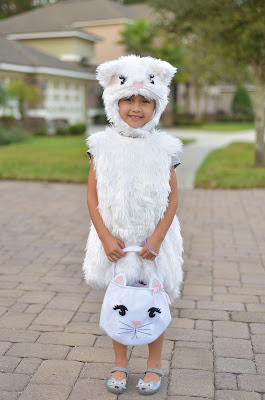 Grandma and Grandpa came by and met up with us before we set out on our trick-or-treating. 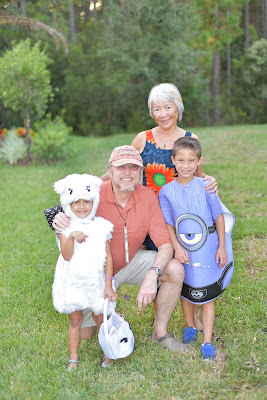 We all went over to Gina and Mark's house beforehand and the kids got to play with their friends for a while as everyone arrived. 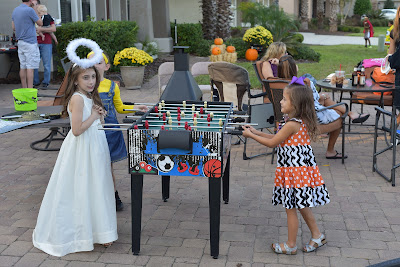 Before we set off trick-or-treating, Mark tried to wrangle all the kids together for a group photo. It kind of worked, but most of the kids aren't good at looking at cameras. Thankfully Connor and Paige are used to it and always cooperate. 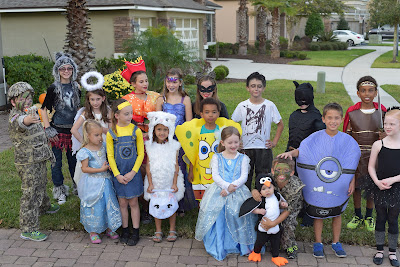 Grandpa Rick took a pic of the kids and a few of the adults as well. 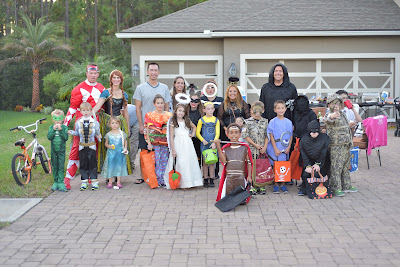 Once we set off, it was an insane mad dash as the kids sprinted between houses. It was almost impossible to keep up and before we knew it, we were stuck with a bunch of children and almost no other parents. 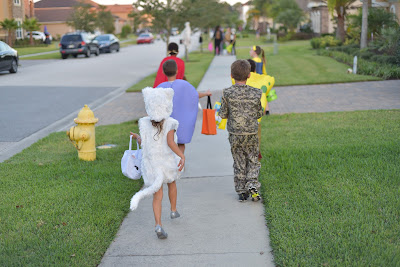 The kids were having a great time until Paige tripped in the grass and landed on a concrete slab. She scraped up one knee and her hands. Thankfully she didn't hit her face on it. We cleaned her up and then continued on. 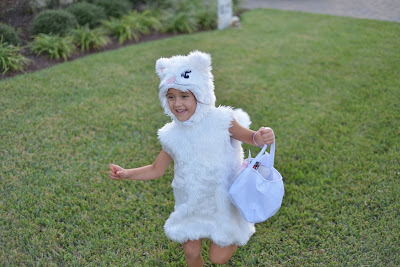 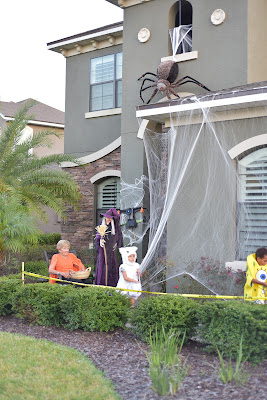 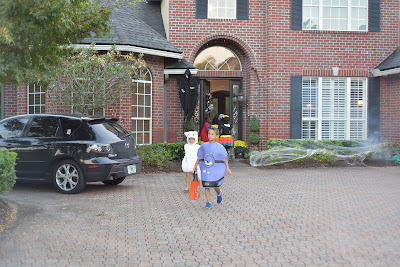 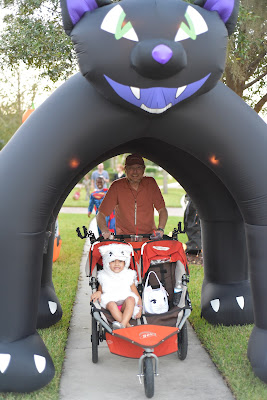 We stopped at the elaborately decorated house across from Anna's house on the way down the boulevard and took some pics with the scary decorations. 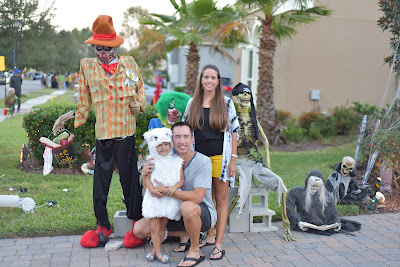 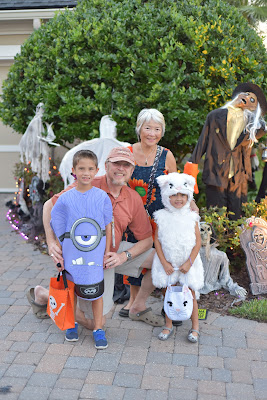 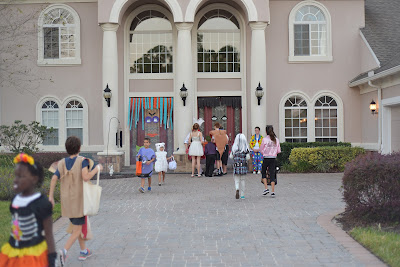 We ran in to a bunch of people we knew and Paige was very happy to pose with a couple of her classmates Ava and Kennedy. 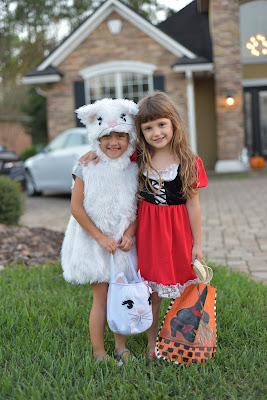 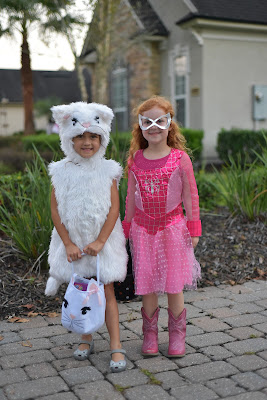 Eventually it got pretty dark and we crossed the boulevard and then headed back to Anna and Kevin's house. 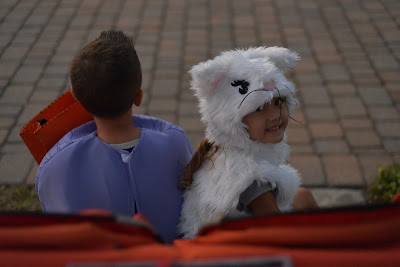 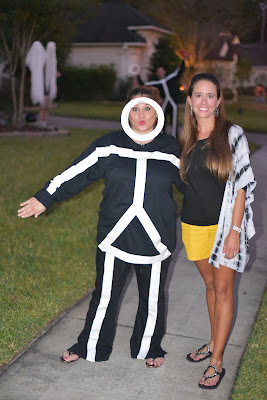 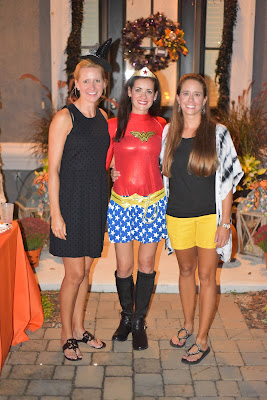 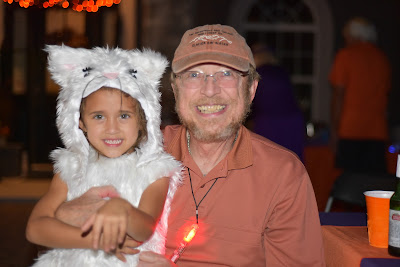 At Anna's house, they rented a cotton candy machine and had already gone through a couple hundred sticks. Thankfully they found a few more and the kids and Andrea all enjoyed some yummy cotton candy. 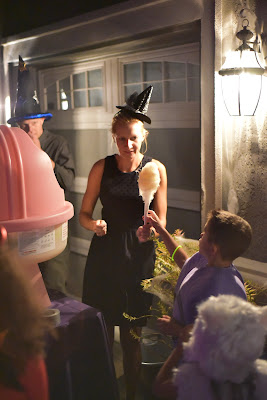 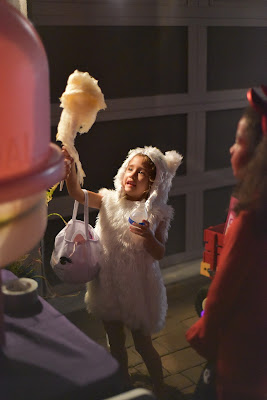 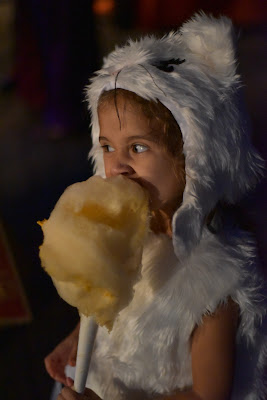 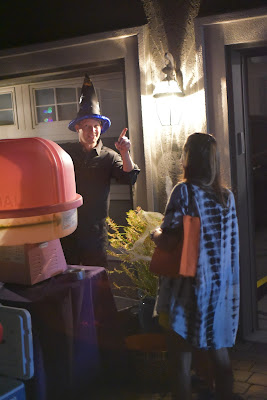 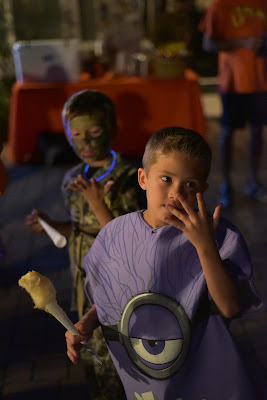 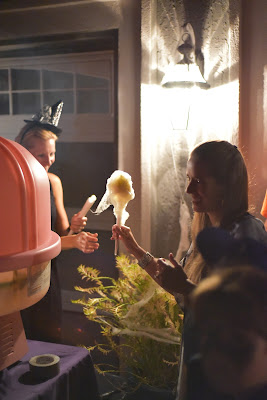 We eventually went back to Gina and Mark's house and caught up with a bunch of our friends we hadn't seen in a long time. It was awesome to have Halloween on a Saturday night and we stayed up very late and the kids enjoyed playing with their friends.

It was a great night! Happy Halloween!
Posted by Shawn Vernon at 3:36 PM