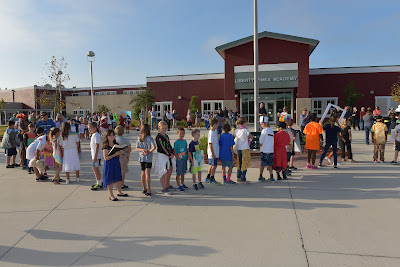 They don't allow the kids to wear Halloween costumes at his school, but they decided that the 3rd graders would create outfits based on vocabulary words they'd been working on. The words were terribly abstract and kind of ridiculous in our opinion. It was interesting to see the outfits children (their parents really) put together for words like "subtraction", "narrator", "cardinal directions", "island", etc.

When Connor signed up for his words we tried to pick concrete words and he was assigned "oceans". Andrea had the idea to buy a blue shirt and then decorate it. Connor helped to color some ocean pictures, and then we cut out a bunch of stuff and used a glue gun to attach everything to the shirt. 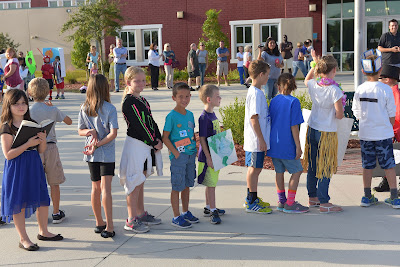 It turned out pretty well, I would say his was somewhere in the middle of the costumes. Some of the outfits were pretty elaborate and others were much less work than Connor's.

The 3rd graders did the parade for the parents after the Kindergartners and Connor was pretty nervous and unexcited about doing it. He was a good sport about it and although I had to ask him to, he smiled for a couple pictures.
Posted by Shawn Vernon at 9:33 AM