On Saturday morning, we went to Amelia Island to spend a week at the Omni resort. When we arrived, Connor participated in an orange ball tournament with some other boys his age. The matches were very competitive. He lost the first match, won the second, and lost the third. At his level, the big difference is still consistency. As consistent as Connor is, some of the other boys manage to get everything in and can hit all day. Connor is probably just as good, but he does try some different shots and he doesn't always recover to a good position after he hits the ball. The hardest part for him is getting discouraged and after he lost a couple games, you could tell he lost confidence. We were still very proud of the progress he's made and he was hitting the ball well and made some amazing shots. 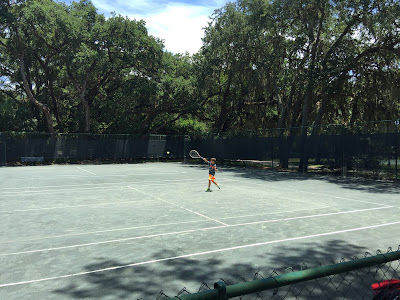 After his match, we went to our room and relaxed for a bit and in the evening went to Marche Burette for steak dinner. 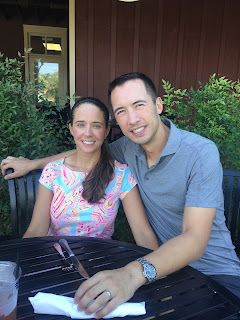 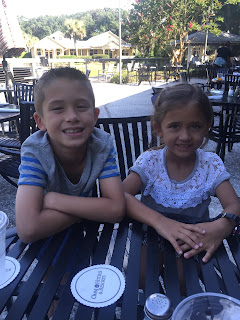 We'd been a few times and this time I decided to get the 36oz Ribeye. It was huge and delicious! I shared a little with everyone else. 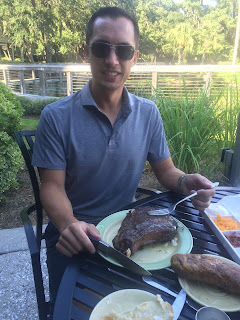 On Sunday, we slept in and then went to the Nature Center on property to look at the activities. We signed up for the crab catch in the afternoon and then we wandered around and looked at the animals and fed the fish and turtles. 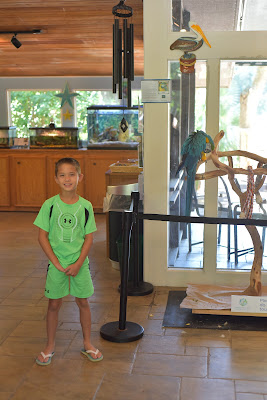 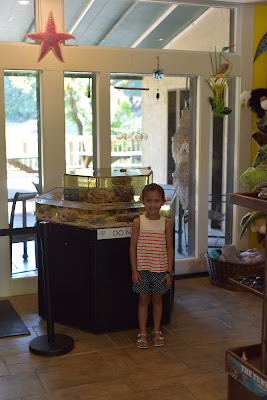 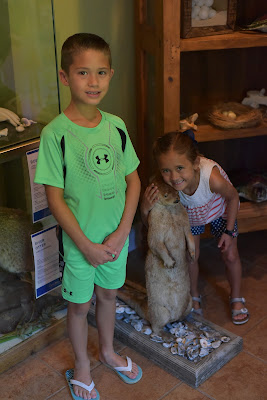 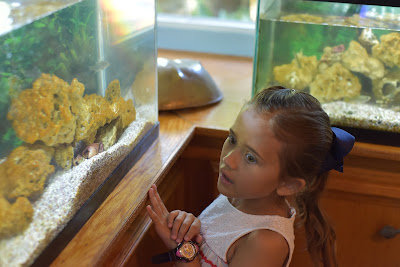 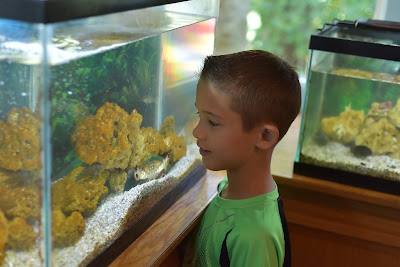 We went to Barbara Jean's for lunch and then went to the crab catch. It was scorching hot. Unbearable to stand in the sun for more than a couple seconds. Bill, the tour guide setup some crab cages with raw chicken in them and then the kids threw them in the water around the dock. 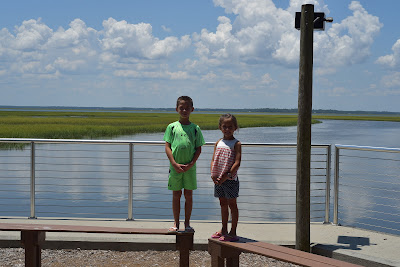 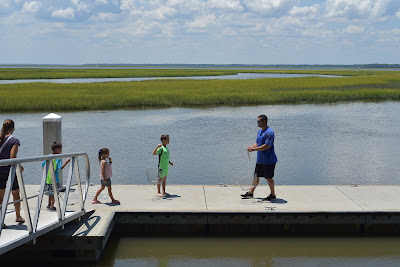 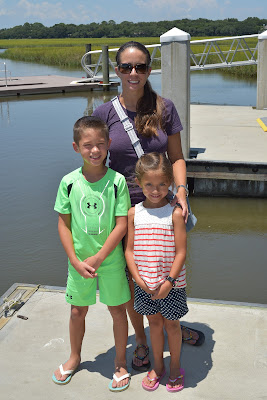 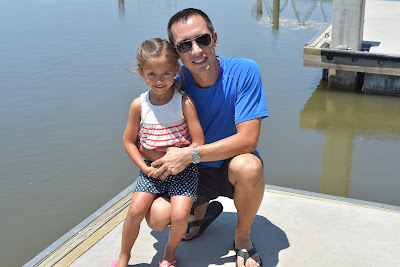 While we waited for our crabby friends to arrive, Bill talked to the kids about crabs and how to identify the crabs. 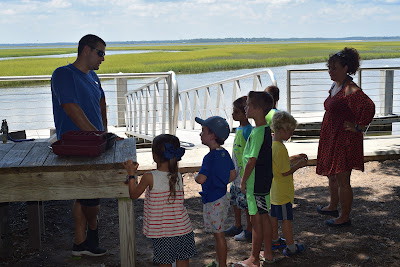 We pulled up all the pots and were disappointed that at first there were no crabs in any. Thankfully a few minutes later Bill tried again and caught a couple. 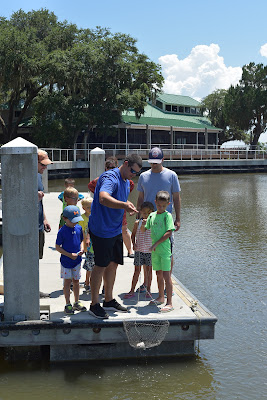 Bill held the crabs and let all the kids touch the swimmerets (fin hind legs) before letting them go. 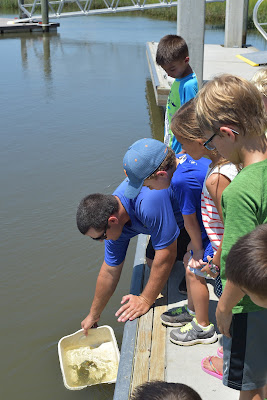 After looking at the blue crabs, we hiked in to the marsh to look at fiddler crabs, then the kids used little nets to catch shrimp and other small animals around the dock. 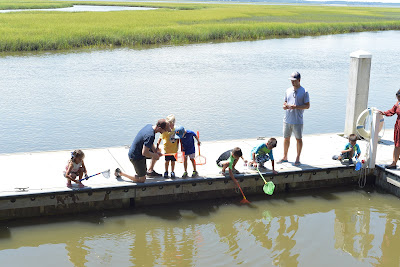 After the tour, we went back to the room and I swam at the pool with the kids. It was still plenty hot out to swim, and the pool is great since it's almost completely shaded by the huge live oaks on the property. 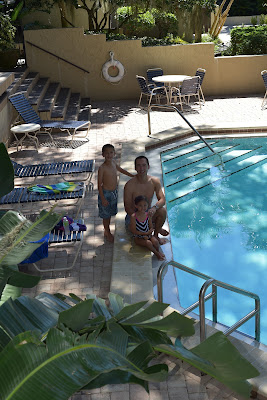 After swimming, we ate some pizza and then went back to the Nature Center to do a bike tour. 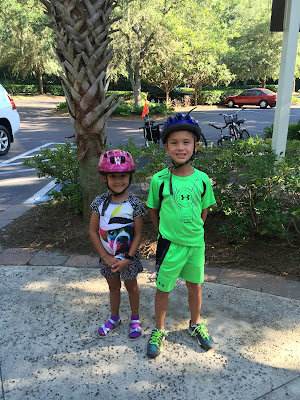 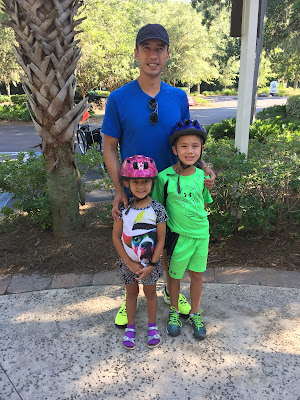 We all had our own bikes except for Paige. She was attached to the back of my bike on a little half bike. I was worried that the 7 mile ride would be difficult towing her along, but surprisingly it was actually easier having her behind me. She is such a powerful little biker and sometimes I would actually have to ask her to tone it down because we were getting to far ahead of everyone else. 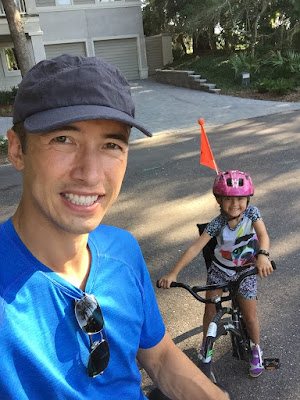 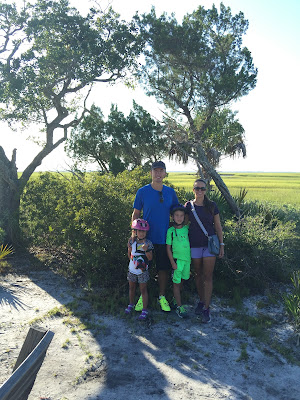 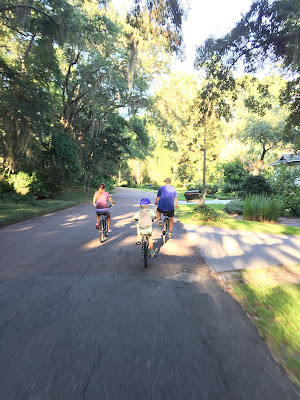 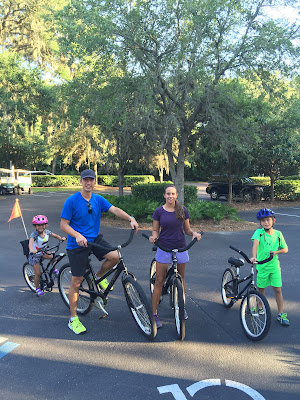 After biking we had some ice cream at Marche Burette. Yum! 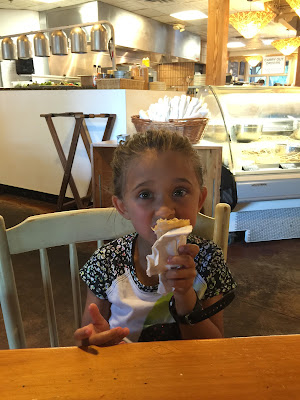 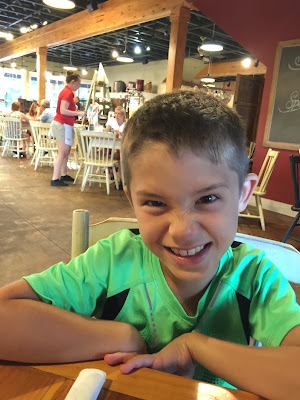 We're looking forwards to the rest of our time this week! It's been fun so far!
Posted by Shawn Vernon at 7:54 PM

Looks like a fun trip. Hope Connor does well and has good spirits. Love the kiddo's smiles.