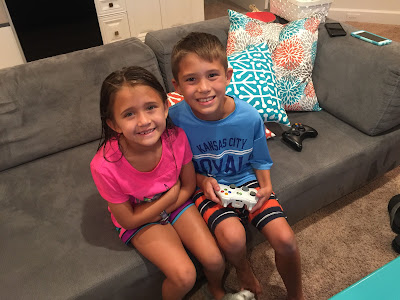 Connor and Paige play pretty well together and recently they've gotten back in to Minecraft. We've played some survival together, but they also both love the creative aspect of the game. It is pretty amazing to see what they are able to put together in three dimensions. It's also neat to see Connor express himself with art in this way. Paige likes to color, sculpt, draw, and paint. Connor doesn't like to do much artwork, but something about the Minecraft medium is fun for him and he'll spend hours putting together all kinds of things.

The other day they saw a Youtube video where people would have a time limit and contest to build some things in Minecraft and they decided to play the same way together. They first created a couple of boundary boxes and were only allowed to build inside the box. Then, they set a timer for 15 minutes and built inside the box based on the theme, within the time limit.

They built farms, a wedding venue, a beach, and a campground. It was so cute I had to take a video of them giving us a tour.