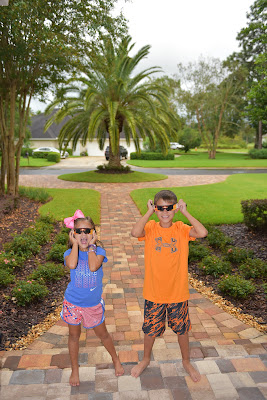 Today (August 21, 2017) was the first full solar eclipse visible since February of 1979. Our town was not in the direct path of the shadow, but we were up to 90% eclipse. The eclipse happened to occur right when schools were scheduled to release kids for the day and the schools freaked out and were worried that the kids would stare at the sun and go blind. As a result, any absences were excused and we decided to keep Connor and Paige home.

There was eclipse mania all over America and I wasn't able to find any eclipse glasses on Amazon or anywhere that would arrive on time. Thankfully Andrea found some on OpticsPlanet and we were able to get a shipment on time for the big day.

Unfortunately, as is typical this time of year, it started raining in the afternoon. I knew that around 2:45pm was the highlight of the eclipse in our area, but it was still raining pretty hard and I was super bummed out. I went to my office and pouted, but Andrea yelled for me that there was a little sunlight coming through one of the windows. Through some miracle there was a parting in the clouds at the perfect moment. We all ran out front and saw the eclipse through the glasses. It was definitely a bit more yellow and sunset-like lighting at that moment. It would have been nice to have a clear sky to see how different the lighting really was, but I'm thankful we at least all got to see it today.
Posted by Shawn Vernon at 1:00 PM