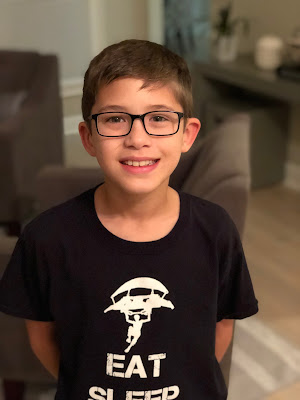 In our previous post about Connor's contacts, we'd gotten some sample contacts, but hadn't yet received his glasses. Since then, Connor's gotten his glasses and he's also been wearing his contacts almost every day. Unfortunately he's really struggled with getting the contacts in to his eyes. His right eye tends to be a little easier, but his left is really hard to pry open and keep open as you get the contact near it. We've had him spend 15-20 minutes at a time working on putting the contacts in, and typically he will use a finger on his right hand to bring the lower eyelid down and will use his left hand to pull open his upper eyelid. Just as he brings the contact close and it touches an eyelash he'll blink and give up. It's frustrating to watch, and it's definitely frustrating for Connor.

This past week he's been getting better. He's been getting close to the mirror and a few times has actually touched the contact to his eye, but he just didn't quite get it to stick without one of us guiding his finger to his eye.

Finally, yesterday January 5th, Connor did it! He got the right contact in and we were all super excited for him. Andrea and I were so proud of him, but we didn't really expect him to get the left contact in. Connor worked at it, and he finally got it in all by himself. This morning he did both again. We'd told him previously that if he can get them in and out by himself for three days in a row we'll give him $50, and we're hoping that tomorrow morning he can get it done before school and will get his reward.

Those are some cool glasses. They really look good on him.