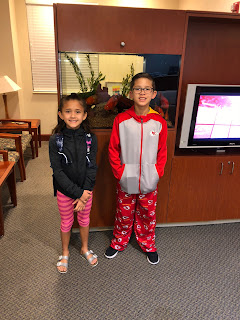 On January 3rd, we got up early to go to the surgery center to get the kids' tubes removed from their eardrums. Both kids have been really annoyed lately with having to wear earplugs while swimming and the issues the tubes cause. We're hopeful their Eustachian tubes have gotten large enough that the ear drum can drain on its own if needed, so we decided it was time to get the tubes out. 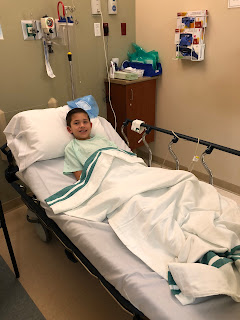 When we arrived for the surgery, Andrea went back with Paige first and I went back with Connor second. Andrea took some pics of Paige (which got lost due to an iPhone issue), and I took a few pics of Connor before the surgery. The surgery consisted of removing the tubes from each ear, scraping open the eardrum tissue that had previously been adjacent to the tube, and then filling the hole with some fatty tissue from the earlobe.

Paige's surgery went well, although the surgeon had a mistake with the earlobe. While the incision and stitches should only have been on the back of the earlobe, the cut went through to the front, so she had stitches on the front and back. Connor's surgery went off without a hitch. 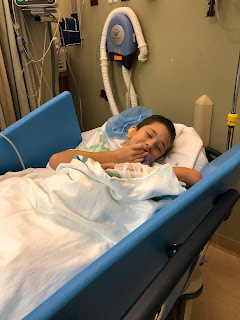 As the kids recovered from the general anesthesia, we sat with them and talked to them. When we first sat with Paige, she was still unconscious. We were talking to the nurse when Paige regained consciousness and her eyes went super wide and she sat up abruptly. She was definitely out of sorts as she woke up, and she asked about Connor and where Connor was. She is such a sweet and thoughtful sister. She was a little emotional, and we held her a bit and tried to get her to relax as they took out her IV. 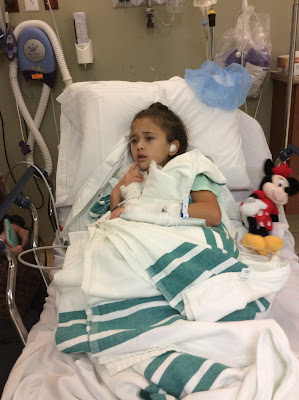 Connor was wheeled next to Paige about 30 minutes later and he woke up fairly quickly and without much of a fuss. He asked for his Iggy monkey and also asked how Paige was doing. They both drank some water and apple juice, and eventually we got permission to take them home. They were given the option of walking out or taking a wheelchair, and both were excited to take the wheelchairs. We snapped a pic of them before they got in the car. 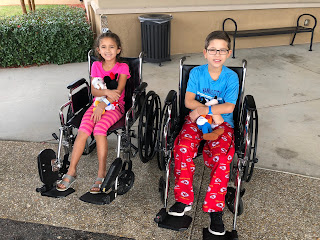 They are both restricted from physical activity for a couple of days and have been mostly relaxing at home. So far, they are doing well, but we want to be extra careful they don't do anything that might dislodge the patch on their eardrums. They've been warned to sneeze with their mouths open, and not to try and hold in a sneeze, or do anything that might raise the pressure in their ear canals. Hopefully they both heal without any fuss and we can look forwards to swimming without ear plugs this summer.
Posted by Shawn Vernon at 6:25 PM