Fun in Florida with Alex and Laura 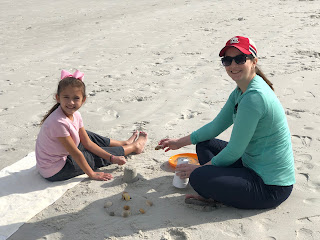 After Grandpa's surprise party, we enjoyed the rest of our weekend with Alex and Laura. They stayed through Monday (which was MLK day), and we went out to eat, went to the beach at the club, rode in their convertible rental car, and watched the Chiefs lose a heartbreaking close game to the Patriots.

Saturday was the nicest day of their visit, in the mid 70's, and we went to the beach in the afternoon. We played bocce ball in the sand, chased the birds, looked at some big jellyfish, and built some stuff in the sand. After the beach, we played a Scotland Yard board game and watched the Australian Open. 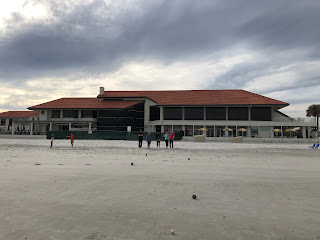 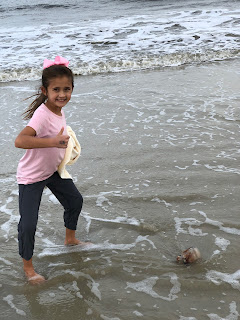 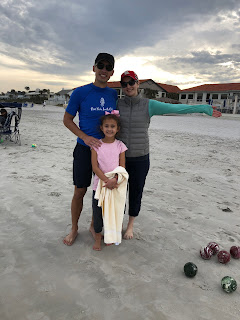 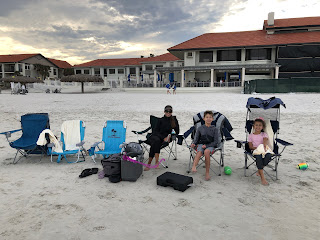 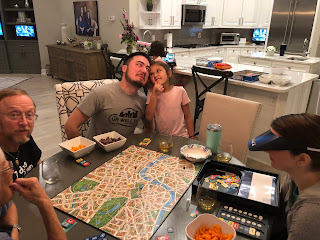 Paige's dream is to own a convertible, and she was super pumped to see Alex and Laura arrive in style in their rental car. On Sunday we had to run to the store, and although it was pretty cold on Sunday, we took the opportunity to put the top down and enjoy the ride. On the way home Laura drove and we even let Paige sit in the front seat since we were very close to the supermarket and driving on slow roads. She loved it! 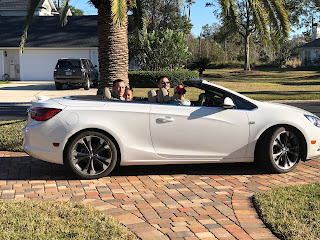 On Sunday we played some more board games, watched some football and even played five person Roblox. Connor was on his Xbox, Paige on her PC, Alex on Andrea's iMac, Laura on her laptop, and me on my desktop. We played Murder Mystery 2, the Shark Attack game, and Surviving Natural Disasters. It was actually a lot more fun than I expected, although Connor did rage quit a few times. 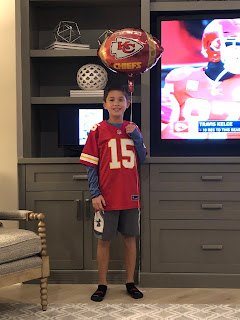 Sadly, we finished off our Sunday together with the Chiefs playing the Patriots in the AFC Championship game. Although it seemed like they were on the verge of winning a few times, Brady spoiled it for us and the Patriots prevailed. It was a disappointing end to our Sunday, but we had a great weekend with family and the Chiefs at least made it a close game.

On Monday, Alex and Laura ate lunch with us at Cantina Louie and then drove to the airport and got back to Chicago in the afternoon. We're glad they made it home safe, and it was awesome for them to come to Florida to make Dad's birthday extra special, and to hang out and spend so much time with us. We love you guys!
Posted by Shawn Vernon at 7:19 PM

This was a fantastic weekend. Really enjoyed being with family. That's the best present of all!