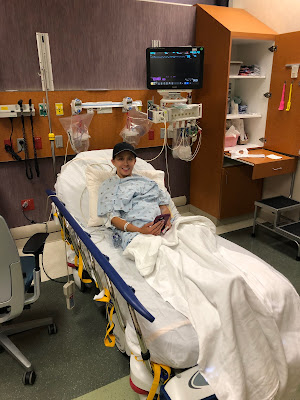 Friday morning (10/11/2019), Andrea woke up with a few small itchy areas on her arm and on her side. There were only a couple, but they were irritating and Andrea got an appointment at the doctor's office to have them checked out. The nurse practitioner said they were likely an allergic reaction to something and recommended Andrea try some over the counter allergy medicines and anti-histamine cream. It didn't help, but we drove to Palmetto Bluff in SC anyways, hoping the hives would go away.

Saturday morning when Andrea woke up, the hives had spread all over her arms, down her stomach to her legs, and on the back of her head. She was going crazy with all the itching. She tried to tough it out, but it was just too much and we decided to head home. 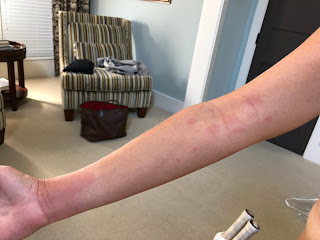 We arrived at the ER on Saturday night and while we were waiting, her lower lips started to swell up. Up until that point, it only seemed like a minor annoyance, however if Andrea's airway started to swell it could prevent her from breathing and that's something Andrea would like to continue doing. In the ER they gave her some steroids and medication and the itching slowly subsided. 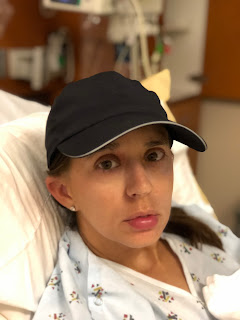 Due to the lip swelling up, the doctor decided it would be best to keep Andrea overnight. Grandpa Rick answered his phone at 10pm and dropped everything to come help us out, we are so grateful that he was there for us. Grandpa stayed the night with the kids and I stayed the night with Andrea in the hospital. By morning, Andrea's lip was much better, but she still had some itchiness. By noon, Andrea was discharged and we celebrated with Grandpa and the kids at Valley Smoke BBQ for lunch.

Andrea's continued taking some steroids through today and the rash slowly cleared up. Thankfully today she's feeling much better. We aren't sure what may have caused the hives, but the physician's guess is that it was related to the chemo. Hoping this was a one time thing!