Connor turns 18 months old on September 2nd! He's been growing up fast recently. His level of language understanding constantly surprises us, however he's still not interested in using words to communicate back with us. He speaks in full sentences, typically he utters 4-6 syllables when he communicates, but they don't really seem to be words we're familiar with. Maybe Chloe knows what he's saying, but we don't yet. 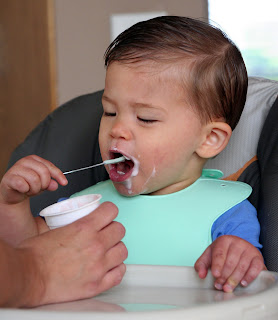 He's also gotten pretty good with a spoon. This morning he fed himself an entire cup of yogurt all by himself. It was pretty darn impressive. We got a couple pictures and even this little video:

Mommy also taught Connor a little bit of sassiness. He loves exchanging dirty looks with her. He'll drop his chin, pout his lips and will scowl. It's pretty hilarious. He does it in this video, but it's not the sassiest look we've seen. He's a natural at it, it must run in the genes he got from Mommy.

Yesterday we had Andrea's family over, and Connor really enjoyed playing in the kiddie pool that Aunt Amanda got him. It's the shape of a shark and it squirts water. Very fun stuff. Thanks Auntie! 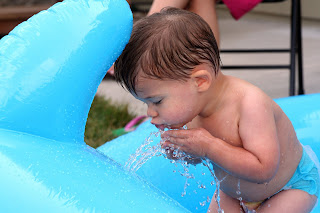 Connor also chowed down on marshmallows. Uncle Nathan was shooting them with a slingshot, and although Chloe ended up eating the most, Connor liked them too.

(There's actually a marshmallow at the very top of this picture!) 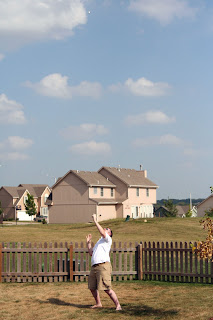 Nathan was trying to catch them in his mouth, and I think he managed to catch one all day... it was windy, so he had a little bit of an excuse, but he still let everyone down and ruined the entire day. Thanks for nothing Uncle Nate!
Posted by Shawn Vernon at 6:26 PM

What an adorable guy! Love that 'dirty look'.
GPV

This is not what I meant by wanting to be in the blog!

I would like to go on record as saying that the one that I caught was one that I shot myself, but Shawn shot 75+ toward me, and none of them were accurate enough for me to have a chance at catching! So who REALLY ruined the day??? WHO?!?!