Mowing the lawn (and a poop story)

No big updates on Connor again this week. He's been a lot of fun to be around lately, he's been in a great mood and he's been very sweet.

It's been a while, so I'm going to post a gross story. Don't read on, if you don't want to hear about something gross. Anyways, Connor was playing the other night, and was over by Chloe's bowl. He came trotting over to Andrea with his hand out, and it looked like he was holding up a moist bit of Chloe's food. Andrea took it from him and noticed he had a bunch smeared on her hand. "Oh gross Shawn" she said, "What is that?". So, Daddy picked up Connor and noticed the stuff smeared on his hand didn't look like dog food. He smelled it, and sure enough, poop. Daddy carefully carried him directly to the bathtub and took off his pants. His diaper hadn't managed to hold in the terrible dump, and for the first time in perhaps a year, when Daddy took the diaper off he gagged from the sight and stench, and nearly vomited. There were fully formed carrot cubes, peas, and corn in the diaper, and somehow seeing exactly what the comprised the poop made it all the more horrible. It took a while to get that filthy baby clean, and we won't soon forget this one.

Well, enough poop stories, let's talk about mowing the lawn. Connor really loves to push around his lawn mower. If we could find a way to safely make that toy cut the grass, it would be Daddy's favorite toy too. 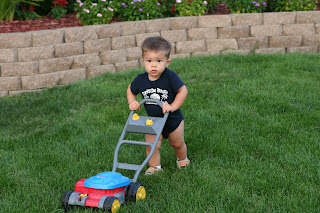 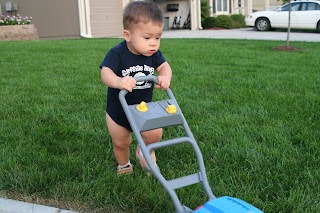 He also loves playing with his friend Mackenzie- 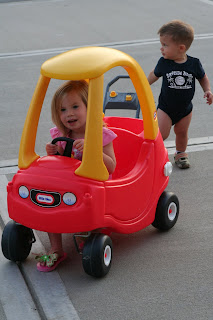 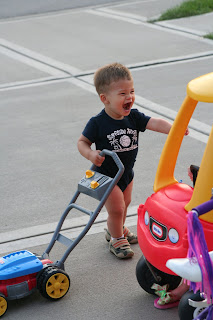 What a sweet guy. Love that laugh.
GPV