Connor turned 21 months old this past week. In a few more months, we'll start referring to his age in years instead, but not quite yet.

Since he doesn't really know when Santa is supposed to come, we invited Santa over a little early and he dropped off a sweet chair for Connor. Poor Connor's too short to get up on the sofa himself and if he wants to sit down it's either on the floor or on the stairs. He seems to like his new baby sized chair, however when we were ordering the chair from Santa's website we didn't realize that the line on the cushion's a light shade of pink. On our computer it looked white. Thankfully Connor doesn't know the difference and we've flipped it around backwards which helps, but it's still a little noticeable. Hopefully that pink stripe won't entice a girl to sit in it, Connor does not want to get infected with Cooties. 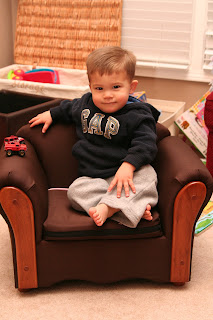 Connor's also probably not fond of sitting on the couches because that's where he's forced to sit when he's in trouble. He's been getting in trouble quite a bit lately since he's been testing our limits routinely. Typically he gets to sit in timeout for hitting and throwing. In the picture below, he smacked a toy and when Daddy told him "No Hitting" Connor turned and slapped Mommy's leg.

Not very happy about time out: 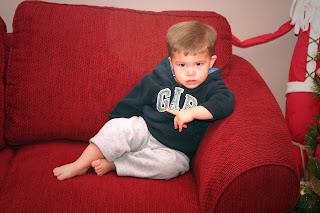 Connor played a while with Allison, Drew, Nate, Abby, Grandpa and Grandma this weekend. They all stopped by to visit and Connor had a great time with them.

Connor playing with Allison while he should be eating: 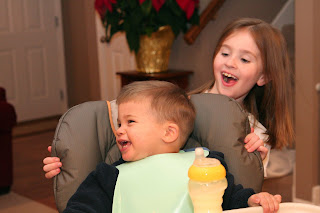