Connor, calm before the storm... 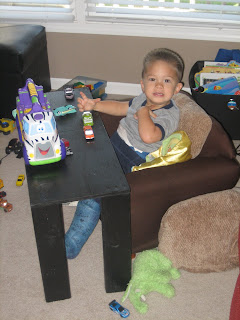 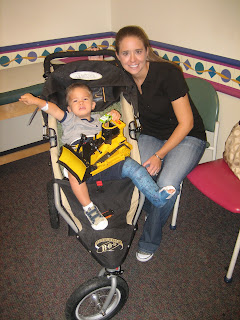 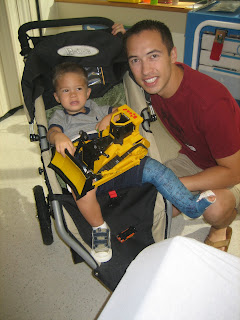 The lady that took the cast off used a cutting tool that seemed to have a vacuum attached to it to suck away the bits of cast that were cut off. It was a fairly clean process, but the machine vibrated the entire cast like crazy as it cut and it was very very loud. Connor is pretty scared of loud things in general, and this machine absolutely terrified him. We brought some ear muffs (great idea Grandpa Garry), which helped, but even with them he was in a state of panic by the time his cast was cut apart. 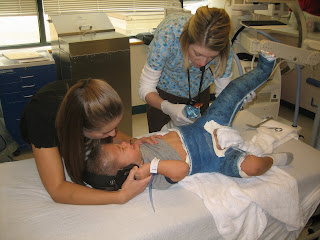 We kept thinking she was done, but as she pried it apart she'd have to re-cut some areas. Connor would start to settle and then would freak out again when the loud saw came back out. Finally though, the big moment, where she lifted away the big blue cast...


Connor's skin looked pretty good except for some areas down on the sides of his hips. It looked like maybe some crumbs or something had fallen down into the cast in those areas and had irritated the skin a little. There were some very small red bumps in those areas and some brown spots where the crumbs or dirt had stuck to his skin. Besides that, his skin looked pretty good.

His left leg didn't look like it had atrophied too much or anything. It looked a little skinnier than the right leg, but not horrible. 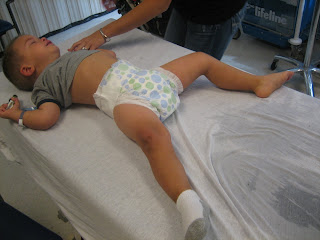 It was very sensitive for him to move anything and he hated us touching his exposed skin. We were given a tub of soapy water and we cleaned him up a bit and got him dressed. He seemed so much taller, but so much littler without the big cast. He is definitely lighter!

We went to eat at McAlister's with our friend Jordan Miller afterward and we bought Connor a little truck to celebrate his big day. We tried putting a little weight on the leg, but he's definitely not comfortable standing on it at all yet.

Daddy's terrified that Connor's going to break something else, and we're going to take everything very slowly and easy for a while. We're really excited to see him out of the cast and on his way back to being a normal toddler again.

Aha!!! I found you. You thought you could be that kind and then just disappear into thin air. I think not! By the way...neat blog guys. I was so taken aback by your generosity. I know Ali was in tears when he read your card. We were both deeply moved. It goes without saying that what you did was completely unnecessary, but certainly appreciated. You guys WERE McAlister's. I can't think of any guests that were more loyal than you. We're all very sad to see things end the way that they did. But I guess that's life. We'll pick ourselves up, dust ourselves off and move on. I hope all is well with you and Connor in the future. Who knows, maybe I'll see you in Lee's Summit sometime. Anything's possible.

Greg, Ali and the gang at McAlister's.