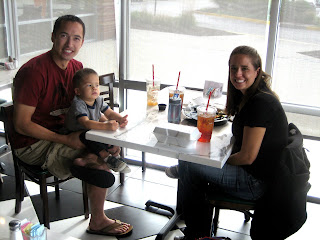 Today is a very sad day for us. Yesterday was the last day we went to McAlister's Deli, and as of today they're officially closed in Kansas City. We were going to go today too, but we called and it looks like they're already closed for good.

When Andrea and I went to college in Springfield, we fell in love with McAlister's Deli. It's a nice restaurant with a lot of variety that we both really love for a lot of little reasons. We both love the sweet tea, I love that you can get lots of different sides instead of just chips or fries, Andrea likes their baked potatoes, Connor loves the macaroni. It's one of the few places that we all really like and don't need any convincing to go to.

I moved to Kansas City in 2002 and while Andrea was getting her Master's degree in Springfield, we'd eat there every weekend I visited. When Andrea moved to Kansas City in early 2004, we weren't able to go to McAlister's any more unless we visited Springfield. We checked their website from time to time and one day we were surprised to see that a McAlister's was opening in Kansas City. We went the day they opened in fall of 2005 and for the last four years we've gone every week, usually two to three times per week. It's not close to our house, but we enjoy it enough to make the drive and the drive gives us an excuse to chat, so we don't mind it.

When Connor was born in 2007, we were worried we'd have to cut back on McAlister's, but we brought him along and he's grown up eating their macaroni and it's just a part of our weekly routine.

We really got to know the people that work there and look forward to talking with Ali, Greg, and everyone who's worked there over the years.

We got a picture of Connor with Ali this past weekend, and were going to take pictures with everyone else today, but unfortunately they closed earlier than we expected. 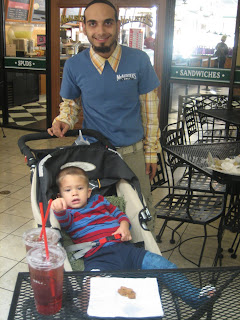 We've really developed a routine and it's going to be tough to replace. Andrea would usually pick me up from work for lunch once during the week, and then we'd go for dinner on Friday and lunch on Sunday. For the past few months we've also been meeting the Millers there on Sundays.

On the weekend days, we'd eat and then we'd do our little routine.

First, we'd walk down to the "Money Slide" and Connor would put a few pennies on the ramp and we'd watch them spin down. 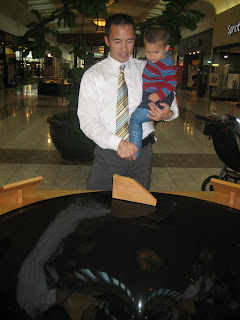 Next we'd go ride the bus or jeep rides by Target. I think we've posted pictures of this in the past, we don't have a recent picture.

Lastly, we've been going to Target to "see cars" and "see trucks". While Connor was in his cast, this was his favorite thing to get out and do. We'd root through the cars and trucks in the store and Connor would usually be allowed to pick out a Hotwheels car or a car from the movie Cars. 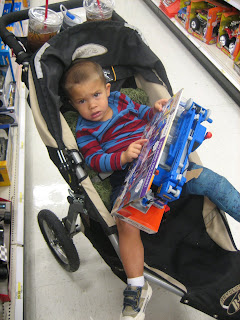 We hear that there may be a new McAlister's opening some time in the future in the Lee's Summit area. Probably no closer than the McAlister's in Ward Parkway, but I'm sure we'll try it when and if it does open. Until then we'll only get to eat there if we go to Springfield or St. Louis.

We'll miss our friends at McAlister's, and if you read this Greg, thanks for the nice comment you posted yesterday and send us your email so we can stay in touch! I'm going to post the comment here so we can remember it and find it some day when we go back and read this.

Aha!!! I found you. You thought you could be that kind and then just disappear into thin air. I think not! By the way...neat blog guys. I was so taken aback by your generosity. I know Ali was in tears when he read your card. We were both deeply moved. It goes without saying that what you did was completely unnecessary, but certainly appreciated. You guys WERE McAlister's. I can't think of any guests that were more loyal than you. We're all very sad to see things end the way that they did. But I guess that's life. We'll pick ourselves up, dust ourselves off and move on. I hope all is well with you and Connor in the future. Who knows, maybe I'll see you in Lee's Summit sometime. Anything's possible.

Greg, Ali and the gang at McAlister's.


It's so weird to see this place torn apart. I don't think I've processed it yet. Thanks again. Keep in touch.

We were very frequent customers at McAlister's too. After our son's football victory today we were going there to celebrate and were shocked to see that it was closed. It was packed the last day we went there so we thought they were doing well. Like your family, it was a place that all three of our boys and my husband and i all loved. Can you give more insight as to what happened? Your blog is the only place on the web that it is even mentioned. Thanks, Sad Hall Family