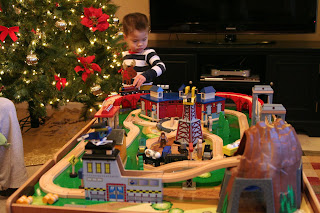 Connor has been dying to have a train table for a while now. When he was in his spica cast, Daddy took him to Toys 'R Us a few times and it was one of the first times Connor stood in his cast so he could play with the train tables on display. Every present he's opened this year, he's been convinced it would be the train that he's been waiting for. Grandma Anders got him a very nice travel train set that he keeps at her house, but he's still been waiting for the big one.

We told him that if he was a very good boy, Santa would bring him a train table of his own and sure enough when he woke up this morning there was a brand new table waiting for him!

He's been playing with it all day long and although he tore up the tracks once, he's done a great job pushing the trains around.

Coming down the steps to see the "Choo Choo Train" table. 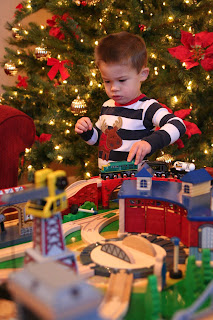 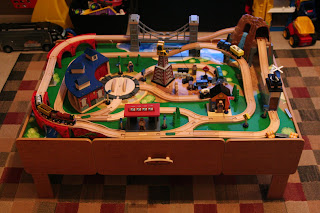 Impressive set! Looks like Connor had a nice Christmas. Hope you all did.
GPV