Connor had tubes put in both ears on Friday (12-18-2009). His speech has been a little unintelligible as he's been learning to talk, and thankfully since Andrea's a Speech Pathologist she knows a few things about speech/language development. We'd taken him to see the doctor about it and some early childhood educators, but none of them seemed too concerned and thought that while he may be a little delayed with his speech, it wasn't anything really worth messing with until he turned three years old.

Since we have spent so much on healthcare this year due to Connor's broken leg, we were close to our "out of pocket maximum" for healthcare and decided to get a hearing test done for Connor. We didn't really expect that they would find anything, but thought we'd rule it out, and if it was a problem we were hoping we could get it taken care of this year since it wouldn't cost us much out of pocket.

A couple weeks ago Connor took a hearing test and they found that he couldn't really hear anything under 35 decibels. The doctor found that there was a lot of mucus behind his ear drum and either because it was so viscous or because his Eustachian tubes were so narrow, it wasn't draining. After we got the results of the test, we would whisper to him, or talk quietly to see if he heard it and sure enough he didn't hear anything that was lower than a moderately loud conversational volume.

The doctor recommended tubes in both ears and we agreed that it needed to be done. We scheduled the appointment for ASAP and were able to get him in fairly quickly.

Early Friday morning we got Connor up and took him to the outpatient surgery center. We were pretty impressed that they were running on time and the procedure really didn't take very long.

Connor before the procedure. 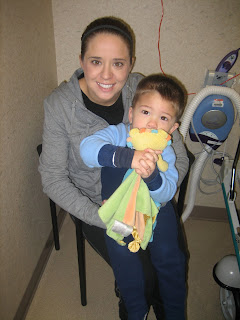 Everything went well and the doctor talked with us after the tubes were in. Apparently Connor's ears were so gummed up with mucus that it clogged their suction device about a dozen times throughout the procedure. We had been second guessing whether it was really necessary, but after that conversation we realized that we'd done the best thing bringing him in.

We went back to the PACU, where Connor was waking up and he was not too happy. 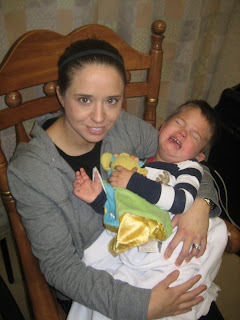 We rocked him for a while and eventually he settled down. By the time we got him home, he was already feeling better and he's been a VERY good boy about letting us put his ear drops in. He's shown no major side effects from the procedure and the very first day he told Mommy and Daddy both that we were talking too loud. He can definitely hear better, although he's clearly not used to it yet.

Connor after we got home. 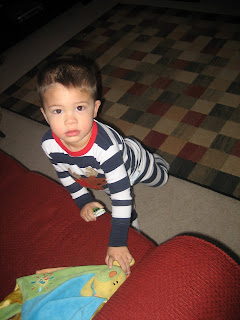 So far so good! The tubes are fairly low maintenance and after the first 3 days we really don't have to do anything special to take care of him or them. We're hoping this helps our little boy's hearing!
Posted by Shawn Vernon at 2:35 PM