Baby Paige is getting big! 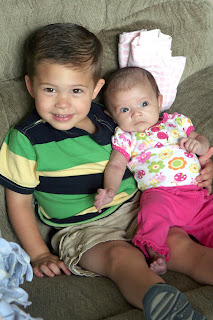 Paige is starting to fill out. She was such a tiny thing for so long but is starting to get a little chunk on her and is filling out quite a bit lately.

She's been interacting with us quite a bit lately. She started smiling and cooing around June 8th 2010 and has been making a lot of eye contact and likes to try and talk to us.

She lost almost all the hair on her head, and it's slowly coming back. 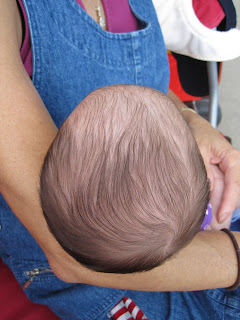 She has been doing really well overall. She is typically quiet and calm unless there's something bothering her like gas or a dirty diaper. She's been sleeping pretty well at night recently and doesn't seem to have her days and nights mixed up. She usually has her last meal around 9pm to 10pm and then sleeps for 3-4 hour stretches through the night. She still wakes up a few times a night, but at least she's sleeping between feedings.

The only thing Paige really hates is poopy. She works so hard on it. Sometimes it doesn't seem to bother her much, but sometimes she turns bright red in the face and pushes so hard we think she's going to burst. She really works hard! No pictures or video of poopy, I'm sure she'd hate that info on the internet. 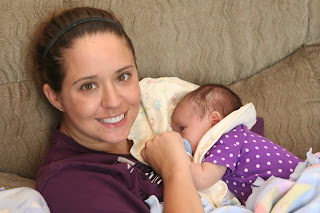 Connor's been amazing with her. He hasn't shown any jealousy or competitiveness with her. Sometimes he wants to be held a little more than he used to, but not very often. He is very thoughtful of her and helps when we change her diapers. He will spontaneously show her affection too, giving her kisses. He's a great big brother.
Posted by Shawn Vernon at 10:06 AM