Fun morning with the kids

On some mornings, Mommy is able to help get the kids ready and out of the house, but on most mornings Mommy leaves very early for work and then it's all up to Daddy. This morning was a pretty tough one.

Daddy got Paige dressed and was getting ready to give her the breakfast bottle when the smoke alarms started going off. They're all networked, so if one gets tripped, they all go off. Daddy got Connor up and told him to get dressed in case they had to run out of the house, then got a fire extinguisher out and started hunting for the fire. This would have been stressful enough alone, but with Paige in the "Baby Bjorn" chest carrier and with Connor complaining loudly about "Mommy's Phone" (the smoke alarms) being too loud, it was very tough. Although the smoke alarms detected something, Daddy didn't see or smell anything. He turned on the ceiling fans and eventually the smoke alarms stopped.

Just after Daddy got undressed and ready to get in the shower, the smoke alarms started going off again. This time, Daddy put Paige down to eat her bottle and told Connor to stay with her. He really didn't want to, so Daddy tried to impress upon him what the smoke alarms might mean. It was possibly too complex for Connor's three year old mind to grasp. All Connor knew is that he was stuck sitting in the bathroom with Paige and he kept moaning "We going die" while Daddy hunted around the house for some hidden fire.

Eventually the fire alarms finally stopped, and Daddy Googled what might cause false alarms. He vacuumed all of the smoke alarms to hopefully remove dust and vacuumed up all the dust around the furnace in the basement. Daddy got out a cereal bar and juice for Connor's breakfast and set him up to watch "Thomas the Train" on Netflix. Finally, some peace and quiet, so he got his shower and got dressed.

Everyone was finally ready to leave the house and Daddy went to get Connor to put his coat on. That's when he noticed that Connor had a pen and was fiddling with it while watching Thomas. He'd managed to write all over his hands, his cheeks and lips. Daddy took a couple pictures of just the right side of Connor's face so he could always remember his fun morning. 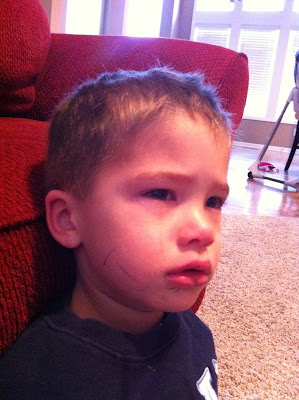 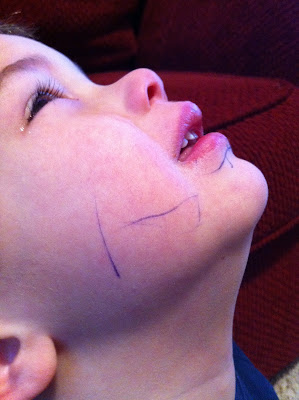 It took a while to clean him up, and finally after almost two hours of getting ready, we left.
Posted by Shawn Vernon at 8:57 AM

Too funny. What a character.
Wonder what's causing the smoke alarms to go off. Might be time to install some others that are not connected to the house alarms. If they all go off, better get the house checked. If only the house alarms go off, disconnect them and get them fixed, or install new battery operated alarms and leave the house alarms off.
GPV