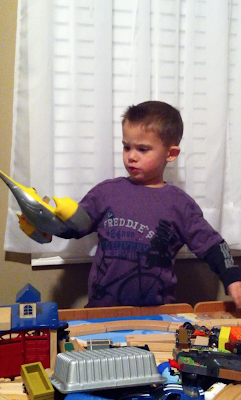 Connor's still loving story time with Daddy at night. We used to read books, but lately he loves to tell stories and use his toys. We love using our imaginations.

We usually tell stories for a while, then play some games on Daddy's phone before going to bed. We were doing a story with some of his little figures and he'd named them after some kids in his class: Brady, Miles, Chase and Logan (his babysitter's son). In the story Daddy recorded, Logan had gotten into Connor's spaceship and isn't flying it right and crashes into poor Connor.