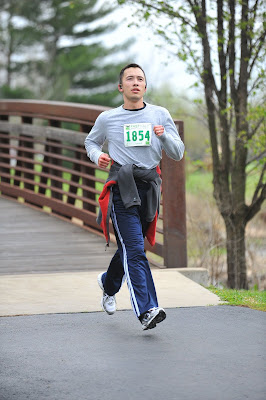 I ran in the Olathe half marathon, sponsored by Garmin, yesterday. It was at the Garmin world headquarters and was in a pretty nice area and was fairly flat. The weather was unfortunately uncooperative. It was about 37 degrees when the race started and the winds were 20mph and gusting to 35mph. Not ideal by any stretch of the imagination. By the end of the race, I literally could not feel my hands. I had to look closely at them while I was trying to pry open a cup of yogurt to make sure I had my fingernails in the right place.

The race went well, and I enjoyed the race atmosphere and all the structure of the run. I completed the race in approximately 1 hour 55 minutes. Quite a bit faster than I normally run, definitely faster than I'd run a full marathon. (official time: 1:54:47)

I'd like to do a full marathon sometime this year, so it was a good opportunity to figure out how everything works and make sure I'm prepared for future races. I made a few mistakes on the race and learned more than I'd expected. I figured it wouldn't be much different from a normal day I go out and do a long run, but there were a lot of little things I learned from the race.

1) Bring gloves and a hat for cold days
2) Bring my own Goo. I didn't think it'd be necessary at all for a 13.1 mile run, but at the halfway point they handed some out and I wish I'd had more.
3) Eat the Goo before drinking water/Gatorade. I drank my cup of Gatorade, then as I was running I ate the Goo, which subsequently dried my mouth out. My mouth tasted horrible and I was thirsty for the next mile or so until the next water station.
4) Bring bandaids. I taped my nipples beforehand, but almost forgot, so it'd be great to make sure I've got spare bandaids. (FYI - on a long run the friction of your shirt on your chest will cause nipple bleeding)
5) Don't cut your hand. I somehow managed to cut my hand right before the race. It wasn't a bad cut or deep or anything, but apparently when you're constantly swinging your arm it pumps a lot of blood in to your hands and my cut did not stop bleeding the entire race. Kind of disgusting. Another reason why a couple extra bandaids wouldn't be bad to have on hand.

I didn't get any pictures during the race, but did see that there were some photographers out taking pics. The pic at the beginning of the post is the photo I ordered.

A quick pic of the hand after the race. Most of the blood dripped off, but it was still a disgusting mess. 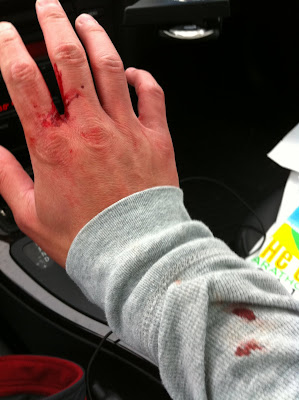