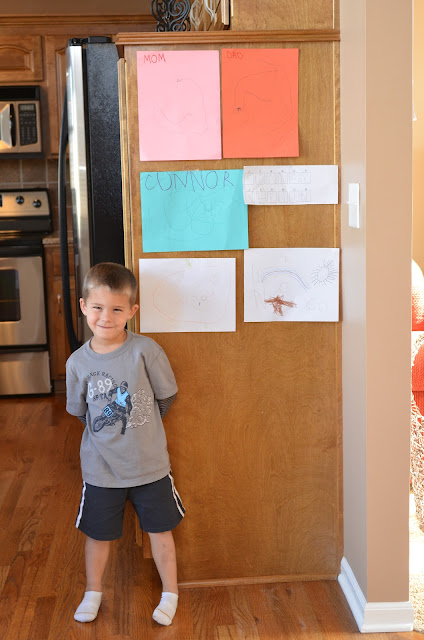 Connor's art has really developed recently. He's been bringing home some great stuff and we've been hanging it up in the kitchen. He brought home a picture for Mom and Dad and then on Thursday morning he told me he was going to make one with his name on it on blue paper. Sure enough, when he got home he pulled out a blue piece of paper with his name on it! His teacher said he wrote his name on it all by himself. He's been writing his first and last name in all capitals lately and he's going to start working on it in lowercase too.

On Friday he made two new pictures at Ms Rachel's house that were pretty impressive (both at the bottom of the photo). The one on the left is a pumpkin in orange with a face. The right one is a boat with a rainbow and the sun. It's hard to see since it's in light green, but he wrote his name on the pumpkin picture. It looks like he started to on the boat picture too but got the letters mixed up.

Neat stuff all around! His art has suddenly become recognizable in the last few weeks. Prior to this it was more abstract and only the people he drew were somewhat recognizable. I was particularly impressed with all the colors in the rainbow and all the light coming from the sun. Good stuff!
Posted by Shawn Vernon at 6:11 PM