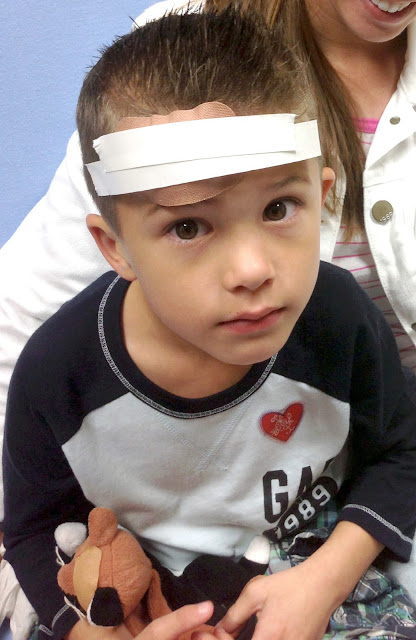 Connor had an accident at school on Wednesday, the day before Valentine's day. Andrea had just arrived to pick him up from his after-school Spanish class and she was waiting in her car for him. Connor left the building with his classmates and he was walking towards Mommy's car while he was looking down admiring his new stuffed kitty cat. The walkway from the school is covered, with metal poles holding up the roof and Connor walked right in to one of the poles. Andrea looked up just after it happened and saw Connor's teacher motioning for her to come quickly. When Andrea got there, Connor was covered in blood and the gash on his head was pretty wide open.

The school nurse arrived shortly after it happened and Andrea said the school staff handled it well. They cleaned up most of the blood, taped up Connor's gash, and called ahead to the local ER so they'd know we were on the way. Andrea called me while they were on the way there and I left immediately and met them at the ER.

Shortly after I arrived, they took off the school nurse's bandage and I got a quick picture of Connor with his kitty. You can see the blood that is still on his fingers and there's some on the kitty cat too. The gash isn't all that long, but it's very deep and bled a bunch. 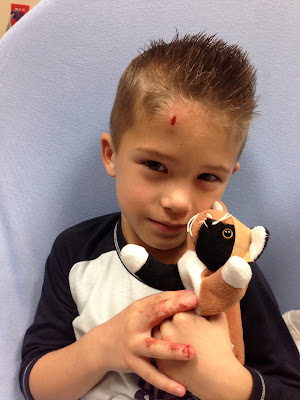 The doctor checked out the gash and gave us the option of superglue or stitches. The superglue would be the easiest thing, but he said that stitches always have the best cosmetic effect. Although it would hurt more, we opted for the stitches. I'm sure 5 year old Connor would have voted for the glue, but maybe adult Connor will be happy we went with stitches someday when the scar isn't as noticeable.

With stitches, they had to numb up the area and he got a bunch of shots in and around the gash. 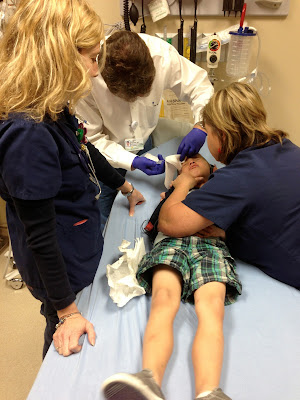 After the shots, which was probably the worst part for Connor, he was stoic and tried to relax and listen to his music. 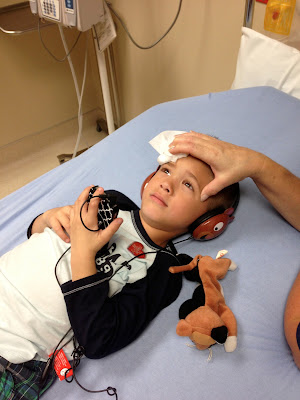 After the area was numb, the stitches went in. I took a few pictures and a pretty long and gruesome video too. The cut really started to bleed after the first few pokes. 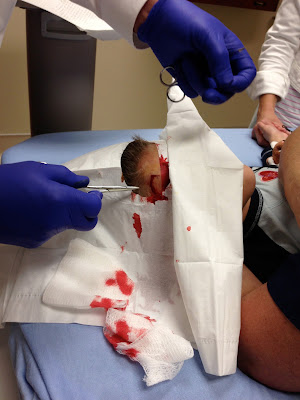 Connor handled it bravely. He hated the shots and it seemed like the stitches hurt him even through the numbness, however he was such a trooper about it all. 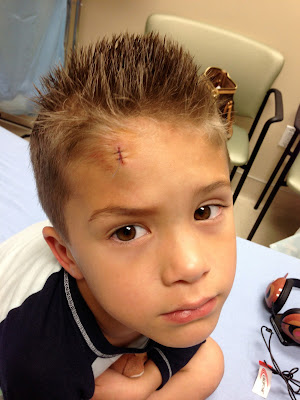 The stitches stay in for 5 days, he gets them out on Tuesday morning. 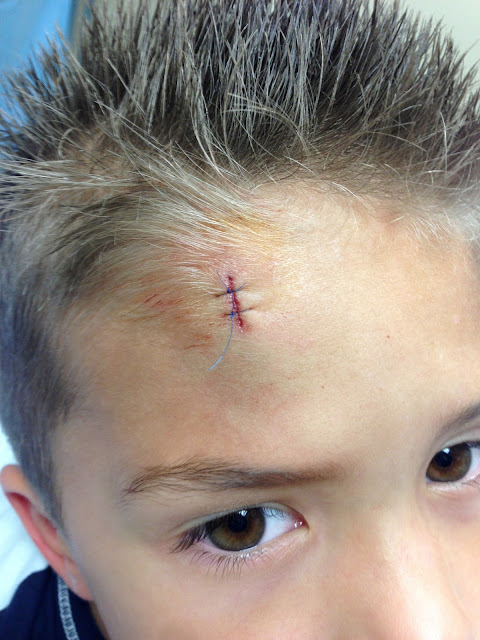