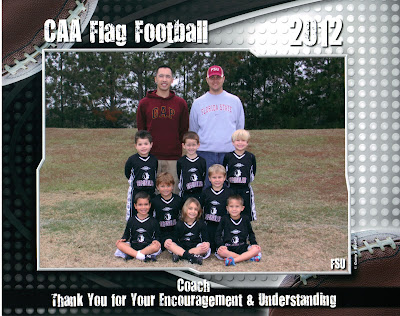 Today was our last game of the Flag Football season. It was an 11 week long season and we had some fun but we're all somewhat relieved to be done. This ends my career as an assistant coach and we probably won't put Connor in football (tackle or flag) going forwards.

Connor enjoyed himself quite a bit and he improved throughout the season and I believe he became the best all around player on the team. He wasn't the best on the team at flag pulling or at throwing the ball, however he learned all the positions, all the plays, and was a great listener. For the last few games we put him in the quarterback position and he excelled and helped the entire team. He did well listening and remembering the plays to run and handed off the ball well with two hands and consistently so the ball wasn't dropped. I was extremely proud of his effort, his good attitude and his athleticism on the field. 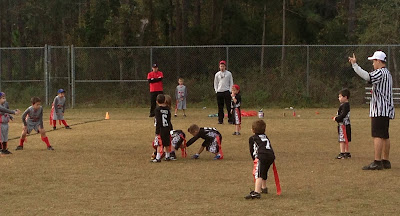 Andrea did capture two of Connor's good runs on video.

After the game, Coach Clay handed out trophies to everyone and the kids got to snack on some goodies.


I'm so very proud of Connor and can't say enough good things about him.


For my part, I'm very glad to be done with coaching. I found it to be frustrating and it definitely tried my patience and nerves. It was obvious the parents had high expectations and Clay and I both worked hard to push the kids and teach them what they needed to know. I met with Clay and discussed things with him, however it was difficult for me to understand boundaries and work within the role of assistant coach. I know I was not much of an asset early on in the season since I didn't know the rules or understand the way the games would go. Once things got going, I did my best to play a part in the practices and games. It was a learning experience for Connor and for myself. I have a greater respect for the people that put themselves out there and take on the challenge of coaching.
Posted by Shawn Vernon at 6:01 PM

I think you both did a great job. It was fun to come to the games and watch you both. Sorry that we missed a few, but glad we made it to the ones we did. Nice to watch the boys in action.

I think you both did a great job. It was fun to come to the games and watch you both. Sorry that we missed a few, but glad we made it to the ones we did. Nice to watch the boys in action.