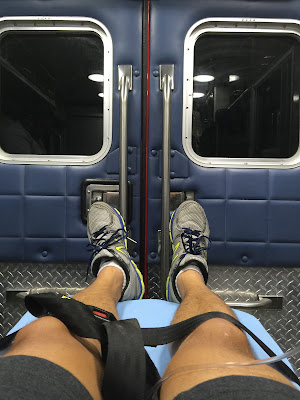 During our trip to Odessa, I was pretty stressed out for obvious reasons. I was trying to balance work, help with the kids, help Genie, and deal with Garry's passing myself. It was a very sad time of my life, and my heart ached. I actually did feel a pain in the left side of my chest, just below the armpit. I played tennis one day with Nate (he won), and went for a jog on my own one day. I usually exercise more, and the stress was weighing me down. I'd been eating all kinds of food I normally don't eat like lasagna. Everyone in Odessa seemed to bring something tasty by. On Saturday, after the funeral, Amanda asked if I wanted to go for a jog and when I got home my stomach was pretty upset. I didn't think much of it and went to bed.

At about midnight I woke up with excruciating pain in my stomach. It was twisting and aching. It didn't feel like I needed to go to the bathroom and I wasn't nauseous. It was a pain I hadn't felt before. I tried to get comfortable in bed, and eventually got up and went downstairs. I paced around a bit, sat in a recliner, and finally after a couple hours decided I needed to wake Andrea up.

Unfortunately, being in pain, I didn't think through my approach. I barged in to Andrea's room, hunched over and moaning. She woke up very startled and yelled "Who is it? Aaaaaahhh!". I guess I looked like a ghost or something, and I had to say "It's Shawn! It's me Shawn!" a few times to settle her down. I told her that I thought we may need to go to the hospital, and Andrea got up and started getting dressed. I went back downstairs and hoped I'd feel better, but the pain was getting much worse. Genie woke up and checked on me and I felt terrible for waking her up with it since she'd been woken up so many nights in the past years taking care of Garry.

We discussed it, and I told Andrea that we should drive to the hospital and that I'd probably be fine. She suggested calling the ambulance, but I didn't want to wait for them, and it was still somewhat bearable pain. We got in the car and started driving. Andrea was pretty nervous and asked me a few more times if we should just call the ambulance. At that point, the pain was creeping up in to my chest and I was scared that I'd be in really bad shape and Andrea wouldn't know what to do or we'd both panic. I told her if she wanted to just call the ambulance that would be fine. She called her mom and told her to call the ambulance, then drove us back to Grandma Genie's house.

We went inside and waited. The pain was the worst at this point, and I was starting to have trouble catching my breath due to the tightness in my abdomen. I took off my shirt and Andrea dabbed me with a wet towel to cool me off. I was shaking, pale and hyperventilating. My fingers were tingling and my chest was starting to hurt as well. I was picturing myself lying dead just like Garry had been a couple days before. That didn't help me calm down. Amanda showed up and called Haley (who is a Nurse Practitioner and lives a few houses away). Haley came over quickly and took a look at me. They had me chew some aspirin and finally the EMT's showed up (it had been about a 15 minute wait).

The EMT's sauntered in slow as molasses and hooked me up to an EKG as they asked questions. The EKG showed that my heart was ok, which was a big relief. They asked if I wanted to be taken to the hospital, or if we wanted to drive. I decided to just ride in the ambulance since it might be quicker. The ambulance took forever. They strapped me down, hooked up an IV, connected me to some monitors and then finally drove off. A train was meandering through town, so we had to take a detour to get around it, which took even longer.

After a long drive, we arrived at St. Luke's and they wheeled me to my room. The nurse hooked me up, took blood for testing, gave me some lidocaine, and then I waited for the doctor. Amanda had followed the ambulance to the hospital and took a picture of Andrea sitting with me. 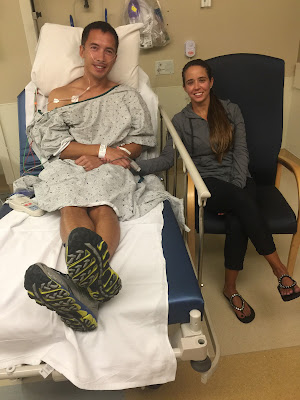 The doctor came in after a long wait and reviewed everything with me. Their initial assessment was that it wasn't my heart, but that it was something in my guts. They performed an ultrasound on my gallbladder, which came back fine. When my lab work was finished, my D Dimer levels came back slightly high, which may indicate a clot. They wheeled me back to the CT scan room and pumped some chemicals in to me that made me feel like my whole body was blushing and then put me through their machine.

When I got back to the room, Andrea climbed in to the hospital bed next to me and we both managed to fall asleep for a bit. I felt awful for Amanda because she wasn't very comfortable in the little chairs they had in the room. Also, she felt embarrassed because she was wondering whether the staff thought we were polygamists. Andrea didn't care about that, she was happy to be the #1 wife and get to lie in bed and rest. 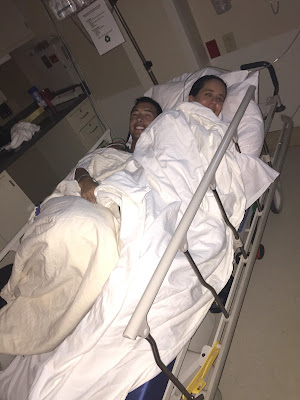 After a wait, the CT results came back fine as well, which was good news. The pain had mostly stopped at this point, which indicated that the pain was probably from acid reflux. Since that is something that many people in my family have, it's probably the root cause, but I never imagined it would feel the way it did. It was a weird thing for me since I was both hoping it was something minor so I could go home, and hoping it was something major so I wouldn't look pathetic and weak.

Finally I was discharged, and the ordeal was done with. It was really a scary night for me. The time in Odessa had already made me think a lot about life and death, and the trip to the hospital was exhausting. I won't be eating lasagna or a lot of other foods for dinner any more. Hopefully this is the first and last time something we do something like this.

Big thanks again to Amanda for waking up in the middle of the night and helping to take care of me!
Posted by Shawn Vernon at 9:02 PM

What a scary time. Been there - done that - with Alice - more than once.
And as you wrote, there definitely is humor in these situations. You don't always see it at first. I enjoyed your writing, and the picture of Andrea in the bed with you is very reminiscent of times Alice crawled into bed with me at the hospital.
Love you guys. Glad you're ok. (And thanks to Genie and Amanda too. Shawn, try not to look like a polygamist too often. Word will get around......)