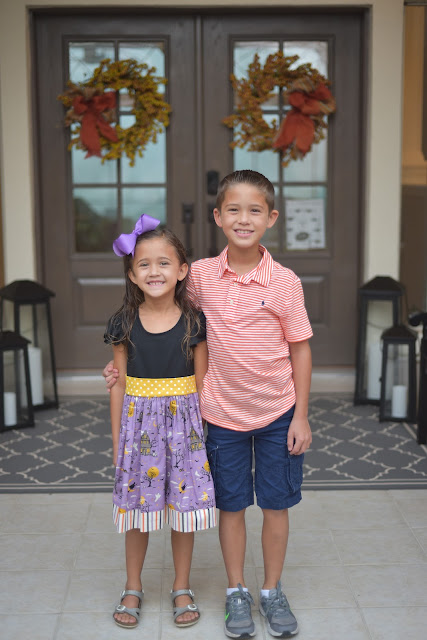 Halloween fell on a Monday this year, which definitely wasn't ideal. Andrea had the kids wear some Halloween appropriate outfits for school and I got a picture of them out front before the bus came. After school, the kids ate dinner, relaxed for a bit and then we got them dressed up around 5:30. Grandma Alice and Grandpa Rick came over and we took a few pictures out front with everyone before heading out. 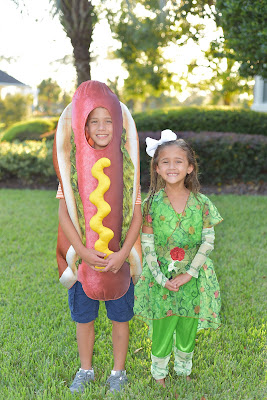 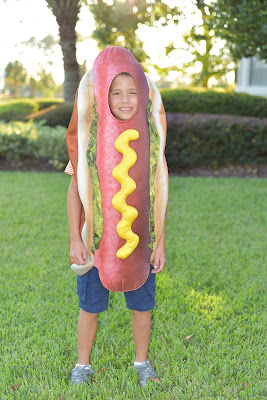 Connor was a hotdog this year. He'd really wanted to be the Zodiac killer or something super scary. We went to Target to look at costumes and he kind of liked a shark costume, so it was in the cart for a little while. Andrea and Connor went around a corner and at the same time they both spotted the hotdog and got so excited. Andrea thought it was hilarious, and Connor absolutely loved it. He was a little torn between the shark and hotdog, but in the end the hotdog won. 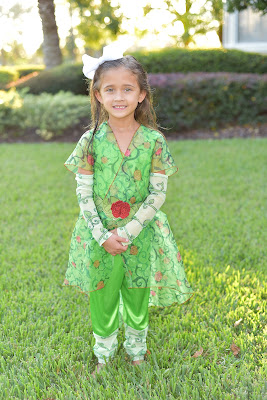 Paige dressed up as "Poison Ivy", a DC comic-book villain. We've played a Lego Batman Xbox game in the past, and Paige always like to play as the females in the game and Poison Ivy was one of her favorites. Poison Ivy would use plant powers to attack and her signature move was to kiss her enemies, which would poison them. 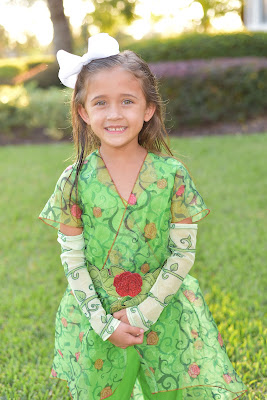 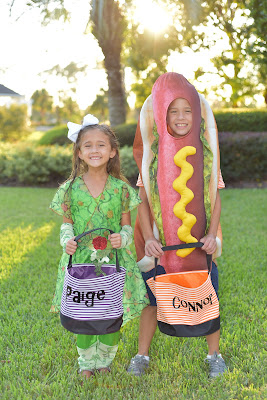 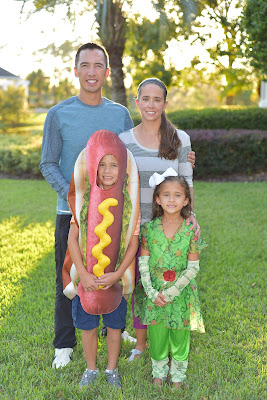 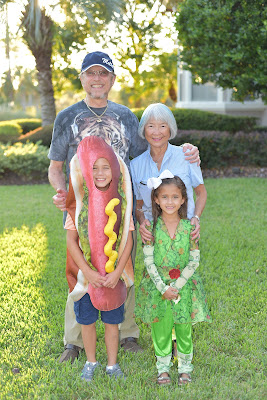 This year we came up with some new plans for trick-or-treating. The past few years we've enjoyed going over to Gina's house to hang out with neighbors for a bit and then we'd frantically chase the children as they sprinted from house to house. Unfortunately Gina wasn't having a party this year, so we decided we should take the opportunity to enjoy our new neighborhood. The tricky thing about our new neighborhood is that the houses are a bit larger and the lots are a bit larger, so everything is pretty spread out. We knew if we did our regular plan and pushed a stroller through the neighborhood we wouldn't get very far before we all wanted to ride in the stroller. So, we had been trying to decide how to make trick-or-treating enjoyable.

On Wednesday this last week we did our family pictures and borrowed a friend's golf cart so we could get around on the golf course with our photographer. We had so much fun driving it around we thought it would be awesome to rent one for Halloween. Unfortunately, there weren't any available. We decided that maybe it was time to buy one, so on Friday we went out and talked to a company that is fairly highly regarded in the Nocatee neighborhood. We went through all the options and were thrilled that they thought they'd be able to get us the cart by Monday. They actually did one day better and delivered it on Sunday. It was the perfect way to get around on Halloween. The kids could jump in and out easily and it was small and quiet and easy to maneuver. 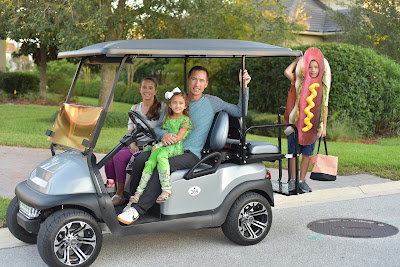 We started up in the North Island part of the neighborhood and eventually made our way down to the Lamplighter section. We ended on Kingfisher and near our house. Everyone was super friendly and had a big variety of goodies. Most people didn't recognize Paige's Poison Ivy costume, but Connor's costume was a big hit, everyone loved the hotdog. 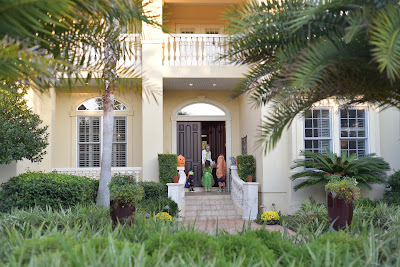 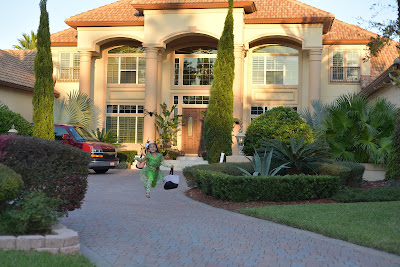 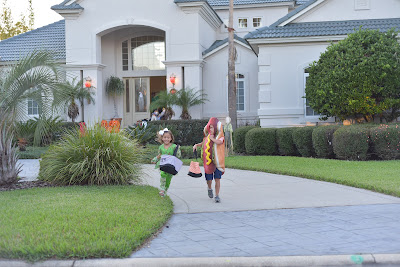 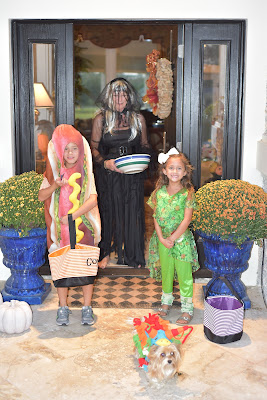 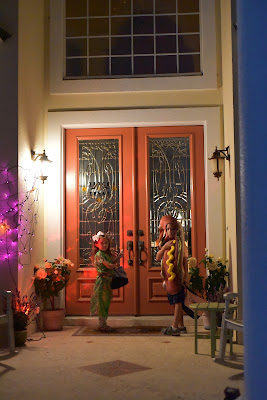 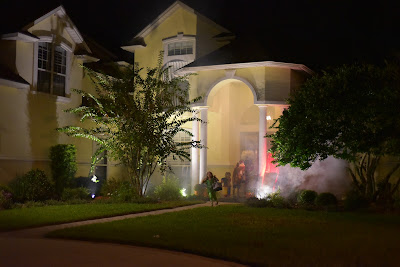 After we got home, the kids put on their pajamas and then turned on the porch lights, hoping to get some trick-or-treaters. Two groups came to the door and I took a short video of the kids handing out candy.


It turned out to be a beautiful night and the new plan was a relaxing and fun way to enjoy Halloween. Connor and Paige enjoyed themselves and we were so proud of their good manners. They would both say "Trick or Treat" when someone opened the door and then would say "Thank you" and "Happy Halloween" after they got their goodies. They are cute and polite to boot! They are both still dog-crazy and loved seeing some of the dogs in their costumes. Connor cracked us up at one house when he saw a dog in the driveway and he said "I hope he doesn't smell my hotdog and try to eat me!"
Posted by Shawn Vernon at 8:10 AM