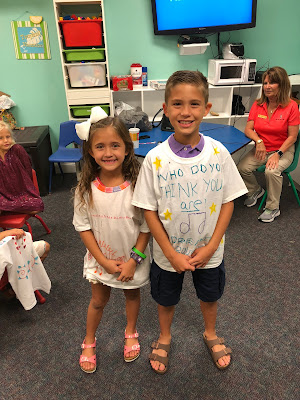 On Saturday, the kids went to a Karaoke party at the club. Connor was not very interested in going, and we were a little worried they wouldn't have fun. They are both really in to music, and we were hopeful that even if they didn't participate, they would enjoy themselves.

There was a fairly small turnout, only seven kids total, but in the end that was actually a nice benefit since they got more time to sing. When I showed up to pick them up, Paige was finishing up a song. I was surprised Connor wanted to sing with her, and they both sang a duet of "It's Goin' Down" from Descendants 2. I took a video, and the music was a little quiet at first so it's a little hard to hear, but I just like to watch them goofing off and singing together.

In the end, they both had a really fun time together and we're happy that they both were comfortable enough and confident enough to participate.
Posted by Shawn Vernon at 5:24 PM