Gator in the pond 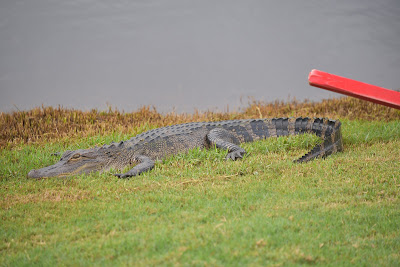 Before hurricane Irma came through, we'd noticed a small gator occasionally in the pond behind our house. We hoped he'd get washed away with the hurricane, but we saw him a bunch recently now the weather's cooled off and he's laying out in the sun outside the water. I snuck up on him and snapped a pic while he was resting. He always jumps in the water and disappears if I get too close.

Unfortunately for Mr. Gator, I am a little worried that he's going to grab Chloe one of these days while she's out doing her business. I called the Florida nuisance gator number and they're going to come out some time to remove him. I think he just barely qualifies for their program since he's around 4 feet from nose to tail. I haven't measured him obviously, but I think he's just a bit too big to be hanging around with our puppy dog and kids.
Posted by Shawn Vernon at 7:12 PM