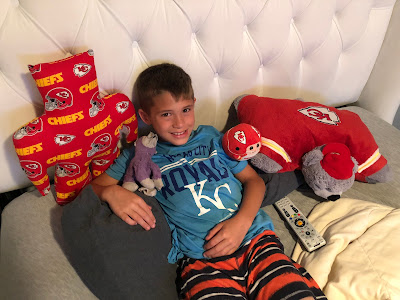 Connor's been a Chiefs fan forever, and although the KC games aren't aired most weeks, the last two weeks they've had some nationally televised games. On Monday night they played the Bucs and on Sunday night they played the Texans. Connor likes to go to the guest room to watch the games and always begs to stay up late and see the ends of the games.

On Monday night, Connor was supposed to go to bed at halftime, but he ended up laying in his bed tracking the game on his phone. Last night (Sunday 10-8-2017), we watched the Chiefs vs the Texans in the family room together and made him give up all his electronics before bed. The game lasted past midnight, so it was definitely too late to stay up on a school night.

Connor is thrilled the Chiefs are in first place in the entire NFL right now with a 5-0 record. I've been watching the Chiefs for a long time now and I definitely don't let my hopes get too high, but I'm also pretty impressed that they're doing so well. 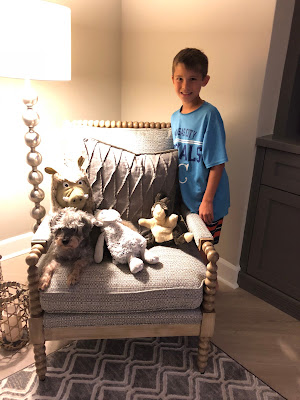 Chloe watched the game with us too and Connor set her up with her stuffed animals during a commercial break.
Posted by Shawn Vernon at 11:31 AM